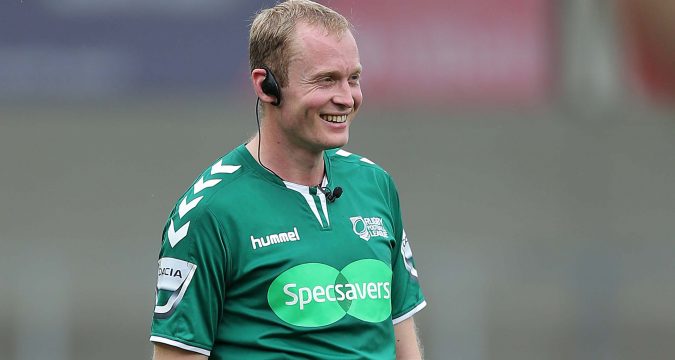 League Express editor Martyn Sadler speaks to Robert Hicks about his prospects for refereeing in the World Cup and about his career as a Super League referee.

Just over a week ago, International Rugby League (IRL), the governing body for the world game, revealed that three British referees – Robert Hicks, Chris Kendall and Liam Moore – would join five others on the Elite International Panel of referees, putting them in pole position to referee some of the biggest games in this year’s World Cup.

This is a relatively new practice by the IRL, which is seeking to adopt more professional methods in the way it administers the international game, particularly given that the number of nations playing Rugby League is expanding quickly, particularly in the northern hemisphere.

Robert Hicks, at the age of 39, is the oldest of the trio.

He made his RFL refereeing debut with a game between Keighley Cougars and London Broncos in 2004, gaining grade 1 status the following year.

His Super League debut was in 2010 he controlled Leeds Rhinos’ home game against the Crusaders, who triumpled 32-26 at Headingley in their best ever season.

Hicks, who comes from Oldham, is a graduate of Leeds University.

“My grandad was the president at Saddleworth Rangers and I watched every game,” he explains.

“The first official game I refereed was West Hull v Saddleworth in the Conference.”

Six years after making his Super League refereeing debut he would receive the ultimate accolade, taking charge of the Grand Final in 2016, and he was also chosen in a panel of referees to take charge of Four Nations matches that year.

And he has more strings to his bow than merely being a match official on the field.

Off the field, he is a qualified solicitor who also works for the RFL, where he is Head of Competitions, Strategy and Governance and is clearly expected to make further progress in his off-field career.

So 2021 is clearly going to be a busy year for him in all departments.

“The first thing to say is that the IRL have been looking at how international refereeing is organised since 2017,” says Hicks.

“Stuart Cummings was appointed as the IRL’s Match Officials Manager in 2019 and he was asked to look at the refereeing pathways.

“Normally you get recognition at the end of the season, year by year, so to be appointed to a panel at this stage of the year is different from what has gone before and it gives people a clearer pathway. We all accept that international Rugby League is the pinnacle of the game and we all want to be involved in major tournaments.

“Basically each national federation (the RFL and the NRL) can have three people on the panel at any one time.

“If the referees’ boss of a national federation thinks that someone new should be voted onto a panel, a discussion would be had about who should drop off.

“There will be a review just before the World Cup.

“Plenty of senior referees who are not in the panel will be working their socks off to get there this year. We all know that confidence is a big thing in refereeing and there is plenty of competition around to make sure we do perform.”

What that should mean is that refereeing standards should be constantly rising. But does Hicks himself believe that standards today are noticeably better than they were, say, 20 or 30 years ago.

“The game is massively different now and comparing eras is very difficult.

“We are certainly fitter than ever before.

“I recall watching John Holdsworth and Robin Whitfield, who both refereed when there was no wrestling and there was a five-metre rule.

“Stuart Cummings was the best referee when I was coming through.

“But there is always the old saying that you’re a better referee when you retire.”

Of course one of the main issues facing referees is the abuse they take from the terraces and also, in the modern age, from some supporters on social media.

“I’m on Twitter, but some referees aren’t and I don’t blame them,” says Hicks.

“In the 1980s in the social club after the game there would be an idiot at the bar mouthing off about the referee. But he is not at the bar now; he goes on Twitter and does it there.

“Everybody has an opinion and nowadays you just have to engage with how the game has gone. Has it gone as well as it could have done for me and for the rest in the group? If one referee has a poor decision it reflects on the whole group.

“In most branches of work you can correct a mistake, an email for example, without drawing attention to yourself. But we just have to go make snap decisions all the time that can’t be changed.

“Just think of how many potential decisions there are in every ruck.

“Occasionally we will make glaring errors and I’ve been guilty of some of them. No one feels worse making a mistake than the person who makes it. It has a massive impact on us over the next few days. You go through a range of emotions when we make a major error. People don’t know how much we care. It can take referees time and effort to get over making a mistake. And of course some mistakes are magnified by social media.”

The old cliché is that the best referee is one who isn’t noticed. And while Hicks accepts that objective, it isn’t always easy.

“There are games where you’ve got to get involved, because the players don’t want to play the game. Having said that, we want to go unnoticed if we can. And we sometimes get criticised unfairly.

“For example, in 2020 I put Aidan Sezer in the sinbin for a mandatory sinbin offence for kicking the ball away to hinder a 20-metre restart. It wasn’t for dissent, but I was criticised for sinbinning him for dissent.

“But as a referee you try not to get lost in the criticism. You try to impress yourself and your colleagues. People outside the RFL don’t understand how detailed the review process is. No one can say we are not scrutinised. Normally that takes four hours for each individual game.

“We are all questioned on why we did certain things and whether we could have done them differently.”

One potential problem for referees in the World Cup this year will be the disparity between the international rules and those of the two major competitions in Super League and the NRL, although Hicks believes it will be a bigger problem for NRL referees.

“The international laws are closer to Super League than the NRL; (RFL Match Officials Director) Steve Ganson has done a lot of work to keep our rules as close to the international game as possible. Of course some rules change every year, but they are closer now than for a long time.

“So I don’t find it too difficult to contemplate refereeing internationally and the interpretations that go with the international game. The differences are relatively minor. For example, if you delay a 20-metre restart you go to the sinbin in Super League, but not in the international game. So there are nuances, but not very big ones. We spent a lot of time, seven days, ironing out the issues for the 2017 World Cup and one of Stuart’s aims is that we prepare fully for this year’s World Cup.”

One of the main issues for referees, however, is the flurry of new rules that seem to be introduced at the start of every new season, or even during the season, as we saw in 2020.

“It takes a few weeks for the players to get used to any new rules,” says Hicks.

“The players have to become comfortable; they can become quite jumpy and edgy and they react to you.

“We did a lot of work on the six-again rule, and I think we did a good job throughout the year. We saw the reduced number of six-agains as the season unfolded.

“The Grand Final and the Challenge Cup Final showed that the referees and players had got used to them. They had both got used to it and the game benefited. Once the game settles down, you don’t need to be so hard on the players.

“I think ‘six-again’ is the best rule change we’ve had in a long time and it had a significant effect on the quality of Rugby League. It’s like when we got rid of the corner flag; it seemed good at the time, and look at how many great tries are scored in the modern game.

“And I don’t buy the suggestion that big players can’t do well with the six-again rule. Sam Kasiano was coming on against tired defenders, for example, and creating havoc.

“Having been in Rugby League as a referee since the middle of the nineties, I can tell you that no rule is a permanent fixture.

“But one of the remits today is to make the game safe. We are at a point where the laws committee will look at making the game more attractive and entertaining.”

Meanwhile Hicks confirms that since becoming a referee he has never looked back.

“I have no regrets; becoming a referee is the best thing I ever did. I’ve travelled the world, been everywhere, and had the best seats in the house for major matches. But the key requirement in this job is that you have to be mentally tough.”