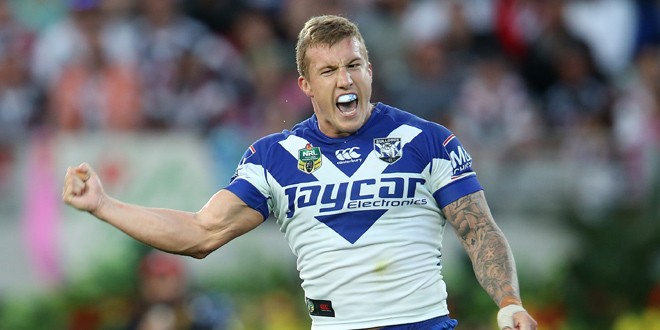 Canterbury Bulldogs Origin halfback Trent Hodkinson has played his last game for the club after suffering a wrist injury on the weekend.

The injury occurred in the first half of their victory over the Newcastle Knights, the club which Hodkinson will be moving to next season.

The Bulldogs are hoping that Josh Reynolds is able to return from the knee injury he sustained last month, in time for the last game of the year before the finals begin.

Reynolds, if fit, will most likely join rookie sensation Moses Mbye in the halves for the Bulldogs finals campaign.

The loss of Hodkinson comes just 2 weeks after Canterbury lost their hooker Michael Lichaa to a season ending injury, however he has been more than capably replaced by newcomer Damian Cook.

The Bulldogs face the out-of-form New Zealand Warriors in the last round before the finals. The Warriors were thumped 50-16 by the last placed Wests Tigers, extended their losing streak to 7, conceding 50 points in each of their last two games.