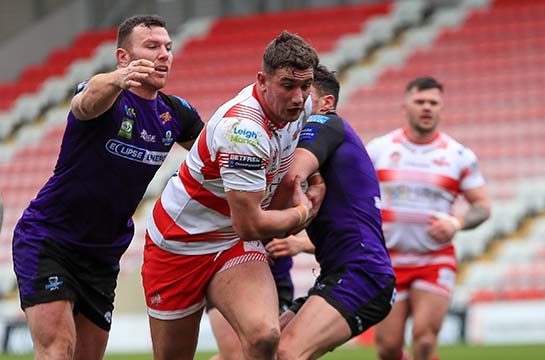 Nathan Mason could he heading back to Huddersfield.

The Leigh prop, who has stood out during a tough campaign, came through the Giants’ development system and made 33 first-team appearances before joining London Broncos for their 2019 top-flight campaign.

The Oldham-born 27-year-old switched to Leigh last year, and is out of contract at the end of this season.

“We’ve had a good look at the squad and what we think we need moving forward,” said Giants coach Ian Watson, whose side are second-bottom of Super League after back-to-back defeats by Wigan, the latest by a 14-12 margin at the John Smith’s Stadium on Friday.

“It’s no secret that we feel that we need middles; there weren’t many middles around at the start of the season and we stop-gapped that with quality in terms of backrowers who can play middle in the likes of Josh Jones and Joe Greenwood.

“We have been looking around, and Nathan is someone we’ve had a little look at. The beauty about him coming through the Academy is playing for Huddersfield means more to him than another club.”

Huddersfield halfback Will Pryce – the 18-year-old son of former Bradford, St Helens and Great Britain player Leon – scored his first senior try and was named man of the match on Friday.

But his side, including debutant teenage forward Robson Stevens, still suffered a sixth successive loss ahead of Thursday’s home clash with Hull.

“There was heaps of effort, but we just took a little time to get into our stride,” said Watson.

“In the first half, we didn’t move the ball as early as we wanted to. But in the second half we saw some really good stuff from our spine of Olly Russell and Will Pryce.

“It just came down to small margins, and it was just one slip-up really. We defended well enough to put ourselves into position to win the game.

“Our attack was not as fluent as we’d like, but you have got to remember Olly is 22 and Will is just 18. This side is only really two weeks old. We will get better.”