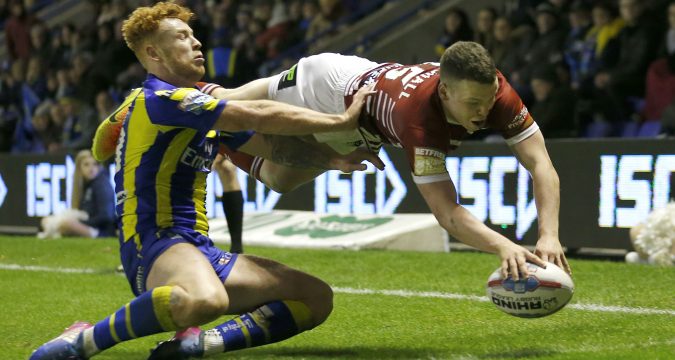 Marshall, 21, has enjoyed an outstanding breakthrough season at the Warriors, scoring 23 tries in 24 appearances, putting him second in the Super League try-scoring charts this year.

Deputising in the absence of Dom Manfredi, Marshall has performed superbly throughout the season and that has been recognised after he came out on top of the eight-man shortlist for the award.

The medal is awarded to the best “rookie” of the campaign, with players who have made less than ten top-grade appearances eligible for the prize.

He is the tenth recipient of the medal, following in the footsteps of Wigan teammates Sam Tomkins, John Bateman and Joe Burgess, who received the accolade in 2009, 2012 and 2014 respectively.

League Express editor Martyn Sadler said: “Liam currently lies second in the tryscoring table, which is a remarkable record for a player who hadn’t made a single Super League appearance before the start of the season.

“Of course if Wigan had had a full complement of players throughout the season, Marshall might not even have had a single appearance to his name, given that he would have had to replace the excellent Dominic Manfredi or Joe Burgess.

“But as so often happens, injuries to other players gave a young player his opportunity, and Marshall took it with both hands.

“Not only did he average one try for every game he played in, but he also made 65 tackle busts and 28 clean breaks, according to Opta Stats. He is the third best player in Super League at making clean breaks, behind Greg Eden and Mark Percival.

“I’d like to wish him the best of luck for his future career.”