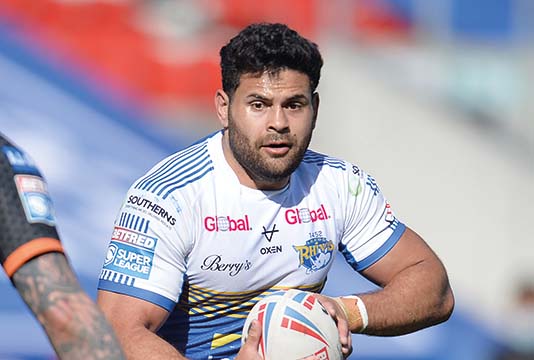 Rhyse Martin is in no rush to leave Leeds.

The Papua New Guinea international, who has been at the club since leaving Canterbury Bulldogs during the 2019 season, is out of contract this year.

The versatile 28-year-old, who helped the Rhinos to Friday’s shock 60-6 win at Castleford, with whom he has been linked, says he’s focused on helping Richard Agar’s side climb the Super League standings rather than firming up his own future.

“There’s been a little bit of chat with Leeds, but honestly, my manager and I haven’t started any negotiations at all,” he said.

“We just said we wanted to concentrate on me playing good footy first and then we will ramp things up in the next couple of weeks in terms of negotiations at Leeds, but for me I just want to be playing well.”

Martin is, however, loving his time with the Rhinos and wants to stay.

“It’s been great. I’ve had a great time playing for Leeds and for the fans,” he added.

“The city has been awesome and I’m happy – I’ve got a little one on the way and I’ve got to look at the options and see where I will be happiest but at this moment in time I am settled.

Martin said his teammates have teased him over the Castleford rumours.

“I’ve been getting it from the boys, but it was the first time I’ve heard of the rumour,” he added.

“That was the hardest, trying to stop the jibes in training as I didn’t know what to say and honestly I’ve not started any negotiations with anyone.”