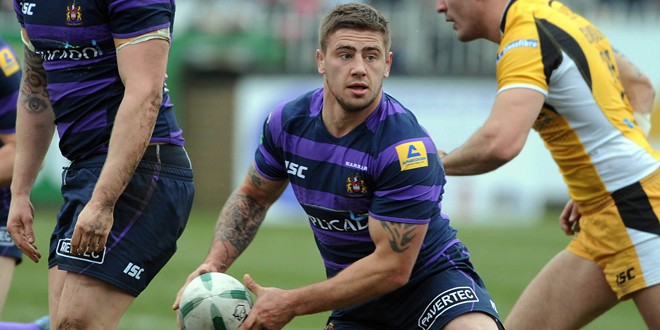 In a nutshell
Castleford Tigers scored a try in the dying seconds to defeat the reigning Super League champions and maintain their unbeaten record in 2014. A 79th minute Matty Smith drop-goal looked certain to end the game but after regathering the ball from the restart, Castleford got the ball out to Luke Dorn who crossed for the winning points.

How it unfolded
First half: It’s first blood to the home side as a Justin Carney break forges a gap for Kirk Dixon who touches down, Sneyd converting his try; Bateman penalised when Wigan regather ball and Cas have possession deep in Warriors territory; Justin Carney is then sent to sin bin for punching before new TotalRL columnist (read his first blog on Thursday) Luke Dorn goes over for the Tigers’ second try, Sneyd misses extras; Adam Milner pounces on a Sneyd kick to set Milner up for third try of game, 16-0 thanks to conversion; Wigan hit back immediately thanks to Josh Charnley, who palms back a Matty Smith kick to send Matty Bowen over; Smith misses conversion but gets another chance as Blake Green goes over following good foundations set by Liam Farrell, this time he makes no mistake; controversy surrounds Smith’s 22nd minute try but it stands and the score is 16-14; Castleford hit back and restore comfortable lead minutes after a disallowed effort, Daryl Clark scoring and Sneyd converting; Tigers pull together to stop Wigan from close range but Tony Clubb eventually goes over, making it 22-20; on stroke of half-time, Liam Farrell outpaces Cas defence to give his side a two-point lead at the break.

Second half: End-to-end stuff as third quarter looks as though it will end pointless, but Tigers have other plans and keep the ball alive and score on the 57th minute thanks to Michael Channing, Sneyd converts from corner to open up four-point lead; Wigan’s Ben Flower sent to the bin for a cannonball tackle and Cas opt to kick, Sneyd slotting one from 25m out to make lead six points; Tigers dominating with numerical advantage but struggling to break down last line of Wigan’s defence; Channing has try ruled out by video referee; Farrell fluffs a chance near the Castleford line with five minutes left; Tigers then fluff their own scoring opportunity with a forward pass from Weller Hauraki; Farrell breaks and again to lay foundations for a Smith kick that Charnley gathers and scores from, Smith converts to tie the game with two minutes to go; Smith lands a last-gasp drop-goal that looks to have sealed it, before a short kick off gives the Tigers possession again and Luke Dorn goes over in the dying seconds to win the match; 36-31 to the Tigers and arguably the game of the season so far.