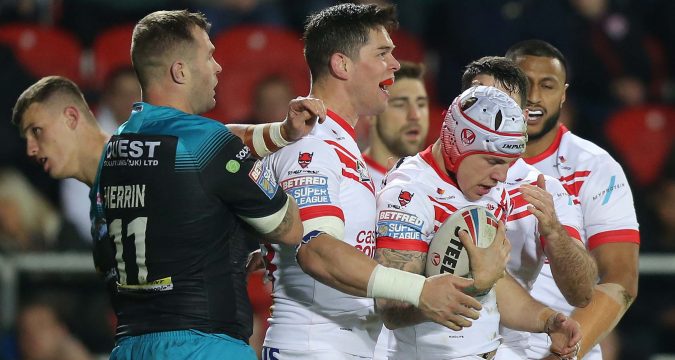 St Helens star Louie McCarthy-Scarsbrook will celebrate a testimonial season in 2020, which will begin with a game against his first club, London Broncos, at the Totally Wicked Stadium on 19 January.

And McCarthy-Scarsbrook, who was brought up in the Isle of Dogs in London’s docklands area, admits he’s always had a soft spot for the Broncos and was desperately disappointed when they were relegated at the end of the 2019 season.

“As a Londoner myself I would have loved them to stay in Super League, and in any other year they would have done, given the fact that they got 20 points,” McCarthy-Scarsbrook told League Express.

“I’m delighted that they will be coming to St Helens for my Testimonial game and I think they’ll give us a strong challenge. You can tell how good they were in 2019 by looking at how many of their players are now with other Super League clubs. And I’m sure they will come back again.”

McCarthy-Scarsbrook, 33, has been given a 12-month Testimonial to celebrate ten years at St Helens, but he made his Super League debut with Harlequins in 2006 and spent five years with them at the Stoop Memorial Ground.

“Those were great days with a great bunch of lads and, to be honest, they don’t seem that long ago,” he added.

“I left London to win trophies with St Helens and I’m glad to say we did that, although it was desperately disappointing to lose at Wembley in 2019. I was disappointed with my own performance in that game and we all just wanted to crawl away afterwards and dig a hole for ourselves.

“Fortunately we made up for it in the Grand Final and i was glad we were able to send Justin Holbrook back to Australia with a trophy, and of course I was glad for us players too.

“We now have Kristian Woolf, who is making some small adjustments but not large ones and we are all confident we can be successful in 2020.

“But I don’t think we can bank on winning the league by 16 points again.”