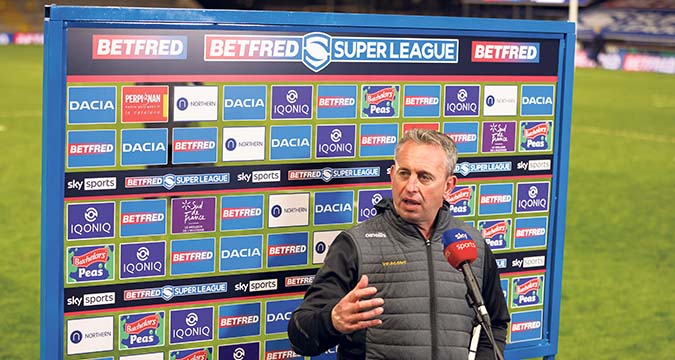 Steve McNamara can’t wait to see his hometown supporters again, even if they boo and hiss at him at the KCOM Stadium on Monday night.

The Hull-born Catalans Dragons coach is looking forward to seeing some familiar faces in the stands as 5,500 fans are allowed in for tonight’s Round Six Super League clash.

He told League Express: “The players are buzzing just to get out in front of supporters again. It’s a great game for both teams and anybody who is playing on Monday, whether you’re in the home or away team, will appreciate the noise coming from the fans.

“The game’s not the same without the crowds and we’re really looking forward to seeing faces in the stands once again.

“I’ve got a lot of respect for Hull and I know the supporters can be very vocal but I’m also hoping I might see some members of my family out there, even though they’ll be shouting for the other side!”

Covid-control restrictions are different in France and Catalans will be allowed 1,000 spectators at Stade Gilbert Brutus for their coming games against St Helens and Wigan, then 5,000 supporters from June 9th onwards.

McNamara added, “It’s so important that we get supporters safely back into the Brutus. Under the current plans we can have 1,000 supporters for the St Helens game but the rules are subject to change. Hopefully, that figure will increase during the coming weeks and we’ll get back to some kind of atmosphere at our home games.

“The supporters have missed out on a lot over the past 12 months and I hope we can see them back with their unique French-Catalan passion as soon as possible.”

Until then there will be plenty of passion from supporters wearing black and white replica kit and McNamara can’t wait for kick-off.

He said: “It’s a really big game for us, we all know how strong Hull are at the moment and we have the utmost respect for them but we’re looking to put a few things right following our cup defeat to Warrington. We were disappointed that we got some of the basics wrong last week. We managed to stay in the contest, which is a good thing, and we had a chance to sneak a win towards the end but ultimately those basics that we got wrong let us down.

“It was more frustrating because we hadn’t done that so far this season so our main focus is to get those parts of the game back in order against Hull.

“We’re smarting, we’re hurting from getting those elements wrong, and we want to put things right.”

With Saints and Wigan visiting Perpignan over the next fortnight, McNamara is facing a crucial period in his efforts to maintain a successful start to the league season so far.

He said, “We all know what’s ahead of us but we are so focused on the Hull game we don’t have much time to consider the next couple of games.

“We know we won’t have to travel for those games which is a real bonus for us, giving us more time to prepare at home, and we know the teams who are coming here but it’s dangerous to look too far forward, we need to get the job done at Hull before we look any further ahead.”

Like most clubs at this stage of the season, Catalans have picked up injuries but McNamara won’t be seeking new recruits to the squad any time soon.

He has two slots available on his quota but the Dragons coach said: “Not at this stage, we’ve got a couple of injuries and a suspension (Gil Dudson) this week but there aren’t any immediate plans to bring players in.

“We’re going okay and we’ve still got players who are looking for more game-time opportunities in the first team.”

The Dragons coach is hoping to have second-rower Matt Whitley back soon from a neck injury that has kept him out for three weeks, he said: “Matt’s improving and his recovery is moving quickly but he won’t play at Hull and we’ll continue to monitor him this week. It isn’t the kind of injury that needs surgical intervention, it’s just a matter of time before it clears up.”

There were suggestions in the French media last week that Dragons centre Israel Folau was close to making a return to Perpignan but McNamara insisted that there had been no further developments with the controversial star, who is still in limbo, under contract to Catalans but remaining in Australia to help deal with a continuing family health issue.

“The situation remains exactly as it was with Israel and there has been no change on that front,” said McNamara.