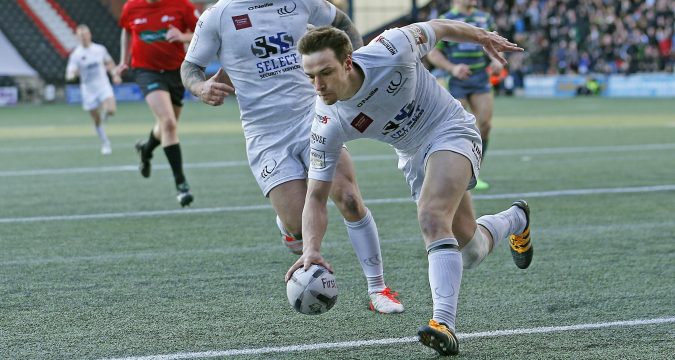 As they head to Wigan on Sunday looking for a fourth win in five games, Joe Mellor has insisted that Widnes’ season starts here.

The Vikings, with just two wins from their first 15 games, looked cut adrift at the foot of Super League and destined for the Qualifiers prior to a run of three wins from their last four.

That mini-resurgence has seen them climb off the foot of the Super League table and, as they prepare to face the reigning Super League champions in a game where victory would reduce the gap to the top eight to just three points, Mellor is in upbeat mood.

He told TotalRL: “It’s not been great so far this season; having not been winning much has made it even worse but our season starts now.

“The way we’re training, we’re carrying confidence into games and when you get one win you can build momentum up and go from there. We’ll be ready for the Wigan game and on this run of form, we can go there confident I think.”

Mellor has also said that no matter which part of the Super 8s Widnes end up in this summer, they are intent on making sure they do so with confidence.

He said: “We have to rely on other results but we’ve just got to try and keep hold of this winning feeling no matter what. If we play a few games at the back end of the year and don’t get the wins but are playing well, we’ll carry that into the Qualifiers. If we play like that against Leigh in the first half I think we’ll be a match for anybody.

“We had two special nights there last year at Wigan and while we know it’ll take a massive effort to beat them, we can’t think about that. There’s four games left, eight points to play for and we’ll leave everything out on the field to try and get out of trouble.”

Mellor formed an impressive partnership with Rangi Chase on his first game with the ex-Castleford man last weekend against Leigh – though Chase is now suspended for the next two matches.

However, Mellor admits he’s been happy with what he and Chase have managed to produce thus far.

He said: “He surprises me a bit and sometimes you do have to stand back a bit! But he was telling me to calm things down, I did that a fair bit in the Leigh game and it really worked. I really liked the way it went; we’ll get better and better.

“It’ll help me no end having a senior half-back there alongside me and it’ll take the pressure off me. I’m just happy to be back playing because I’ve only played five or six games so just staying fit would be a bonus for me.”