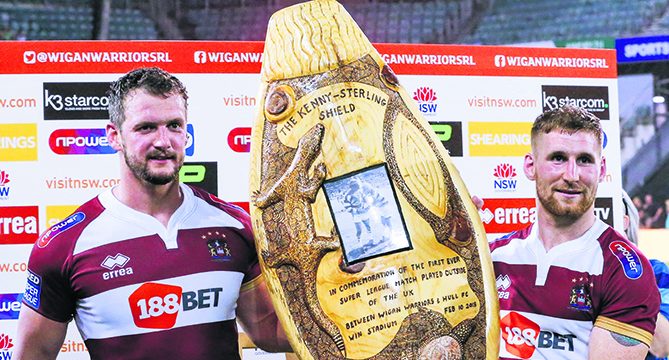 Wigan may well have started the season in impressive form – but their captain, Sean O’Loughlin, has warned that the Warriors’ best is yet to come in 2018.

Shaun Wane’s side have four wins from their opening five games this season, a marked improvement on 12 months ago. They welcome Huddersfield to the DW Stadium on Friday night looking to extend that promising start: and potentially even go top of the league if results go their way.

But O’Loughlin insists that with a newly-formed spine and constant reshuffling within their team, Super League has still not seen the best of the Warriors.

He told TotalRL: “The wins we’ve had have been good wins, but we’re not sitting back and admiring how well we’re playing. There’s more in us, and there’s parts of the game we’re striving to get better at. That generally improves as the season goes on – especially with some adjustments to the spine.

“It’s hard to say exactly what our best spine is at the moment – and I think that’s a good thing. The lads in those positions are all contributing, and while some might want more minutes in their preferred positions, the lads who are involved in the shuffle are all playing really well at the moment.”

The Giants head across the Pennines on the back of an awful result against Hull KR last weekend – but O’Loughlin believes that, if anything, that makes them more of a threat amidst a potential backlash.

“I know they weren’t good last week but that makes them really dangerous,” he said.

“You’ve always got the fear of getting backlash from results like that, and they’ll be banging their heads together this week ensuring they’re spot on when they come to our place on Friday. They’ve too many good players to be constantly playing how they did last week: they’ll get better.”

And while the frustration of last week’s postponed fixture against Castleford still remains, O’Loughlin believes that Wigan can draw some positives from the situation ahead of a run of four games in just two weeks.

He said: “We went into that game with some good momentum behind us and we wanted it to be on – but it’s one of those things.

“We prepped like it was on, so it didn’t really impact on us too much. The positive, I guess, is that we’ve had a full week leading into this hectic period and we’ll make the most of the time off. It gives everyone a bit of extra time to heal up too, which is good.”