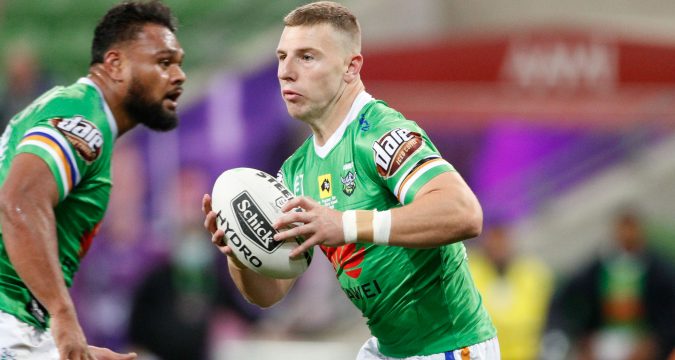 The Green Machine have made a habit of picking off Wigan’s top talent, having signed John Bateman, Ryan Sutton and George Williams in recent years.

Now League Express understands they are keen to sign the 18-year-old forward Rushton, despite the fact he has yet to make his professional debut.

Rushton, who is billed as a loose forward who can also play in the backrow, is regarded as one of the best young English players in the game.

He was sought after by a number of Britain’s leading agents, but ultimately went with Andy Clarke, who negotiated the deals to take the aforementioned Wigan alumni to the Australian capital.

Rushton hasn’t made his debut for the Warriors yet, but was named in their 21-man squad to take on Salford in their final game before the season was suspended.

A Blackpool-native, the 18-year-old is billed as 6’3 and 97kg and has already earned international honours, captaining England Under-16s and playing for the England Academy.

The Wigan St Pats product was also part of the Warriors’ Academy winning side last year.

Canberra’s interest is another ominous sign for English clubs as they face increasing pressure to retain their young talent amid interest from down under.

Melbourne Storm’s head of recruitment, Paul Bunn, came to the UK earlier this year on a scouting mission and identified another Wigan youngster, Ethan Havard, as a player who he recommended should be signed.

Leading Australian agent Sam Ayoub has recently signed up Wigan centre Oliver Gildart and he is putting the feelers out on a potential NRL move.