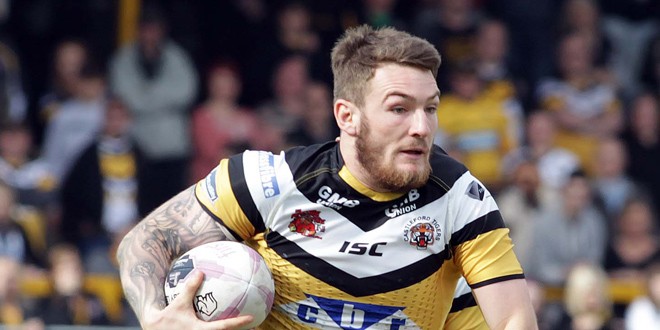 With the business end of the season fast approaching, attention is fast turning to the raft of team and individual honours that will be handed out at the end of the current campaign.

With Old Trafford starting to come into vision as the regular season comes to a close this weekend, the Super League Dream Team will be announced this coming Monday. And on an individual front, the Man of Steel awards are also looming large – with a fair few contenders in the running for the award.

Given how the award will be named in honour of the legendary Steve Prescott for the first time this year, the 2014 winner will create a little moment of Rugby League history when given the trophy this year. But who are the biggest contenders for the award? We profile six candidates right here in our Six of the Best feature – along with a major outside bet.

Should Peacock win the Man of Steel this year, he would become only the fourth person to do so in the history of the award – following in the footsteps of Ellery Hanley, Paul Sculthorpe and Andy Farrell. That is pretty illustrious company, and it would be no less than Peacock deserves after an incredible season. He played a key role in helping Leeds end their Challenge Cup hoodoo, and will be looking to add another Grand Final ring to his collection by guiding Leeds to success in the play-offs.

Daryl Clark (Castleford Tigers)
The transformation of Clark from young rookie into one of the most exciting hookers in the world has been sensational, with the Castleford star lighting up the domestic game for the entirety of this season. He has scored some scintillating tries in 2014, and is surely a certainty to be on the plane with the England squad when they contest the Four Nations later this year. Tipped by many to be a front runner for the Man of Steel, Clark cannot be overlooked when it comes to assessing the runners and riders.

Hill has cemented himself as one of the finest props in the game in 2014, and has led Warrington’s charge towards a potential top four finish with some destructive forward play. Like Daryl Clark, Hill is a certainty for England recognition later this year, with the former Leigh Centurions man a vital part of both his club and country’s plans for at least the next few years. Would a Man of Steel award be richly deserved?

Morgan Escare (Catalan Dragons)
Escare may be an outside choice to many, but he’s without doubt one of the finest talents in Super League at the current time. He’s scored an incredible 25 tries this season already, and is sure to be pivotal as the Catalan Dragons prepare for a play-off campaign beginning next week. The French international may not get as many plaudits as he deserves, but given how the Man of Steel is chosen by his peers, could he be an outside bet?

You simply cannot rule out last year’s winner of the Man of Steel award to go and retain it – and few would argue with the choice should Danny Brough be the one who gets the nod. Brough has spearheaded another fantastic season from the Huddersfield Giants, as they look to lock down a potential top four finish this Friday by defeating St Helens. Brough’s influence on the Giants cannot be underestimated, and he remains one of the most naturally talented halves in the game.

And finally.. Daryl Powell (coach, Castleford Tigers)
For those of you who weren’t aware, a coach has won the Man of Steel award in the past – as Featherstone’s Allan Agar picked up the award after coaching Rovers to one of the biggest cup upsets in Wembley history, when they beat Hull in 1983. Sure, it’s unlikely to ever happen again – but if it was, this year would be as good as any. Powell has transformed Castleford into genuine contenders on all fronts, and perhaps his impact on the 2014 season has been so great that he could be a genuine outside bet?