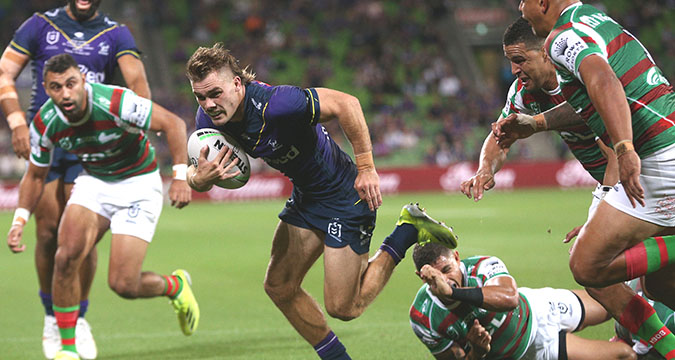 A superb first-half performance by Melbourne Storm, inspired by an outstanding display by Ryan Papenhuyzen, in which they took a 22-0 lead on 30 minutes, proved to be too much of a margin for South Sydney to recover from, even though they fought back to make a final score a respectable 26-18 in the first game of the NRL season.

Papenhuyzen was in superb form at fullback, scoring the Storm’s third and fourth tries and kicking five goals for 18 points after inheriting goalkicking duties from the retired former captain Cameron Smith.

The Storm took the lead on three minutes, when Cameron Munster sold an outrageous dummy to score and they extended their lead seven minutes later, when Josh Addo-Carr broke down the left and kicked ahead. After the next play-the-ball Papenhuyzen assisted Justin Olam for the next try. And then Papenhuyzen combined with Kenny Bromwich to score the third, giving them an 18-0 lead in even time, with all three tries converted.

Their next try came on 30 minutes when Papenhuyzen took a pass from Jahrome Hughes and accelerated into the right corner, beating four defenders to touch down but this time he was unable to add the conversion.

At that point Souths veteran Benji Marshall came onto the field and he seemed to spark a revival in Souths’ fortunes, while Souths fullback Latrell Mitchell also came to the fore, providing the final pass for Alex Johnston to score in the left corner to make it 22-6 at the interval.

As the second half unfolded South gradually fought their way back into the game, starting on 44 minutes when a brilliant Cody Walker cutout pass found Johnston for the winger’s second try, again superbly converted from the touchline by Adam Reynolds.

Shortly afterwards Papenhuyzen kicked a penalty to increase the margin to 12 points, but when Mitchell scored on the left with a powerful run to the corner on 55 minutes, with Reynolds again adding the conversion the margin was down to six points and the momentum was with the Rabbitohs.

But the Storm were fortunate to receive a penalty for a late tackle by Dane Gagai on Hughes, allowing Papenhuyzen to make it 26-18 with 20 minutes to go, and from that point the Rabbitohs couldn’t score again, instead being dogged by handling errors.

And sadly for them, and perhaps for England coach Shaun Wane, the Rabbitohs suffered a significant injury with five minutes remaining, when Tom Burgess went down clutching his left shoulder in agony and was stretchered off the field.

And with less than a minute to go Johnston couldn’t hold Mitchell’s pass with the line in sight and the Storm had held on to win their first game in the post-Cameron Smith era.