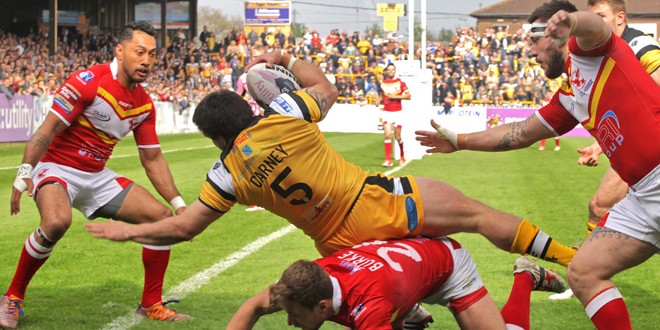 Earlier this month, I picked a hypothetical England team based on stats and form. It got a great response from our readers and Twitter followers, who were all keen to get involved and select their own teams. I’ve decided to do it again, but this time it’s a Super League Dream XIII based on the 2014 season so far, using form, Opta stats, and the League Express Albert Goldthorpe Medal table. Scroll down to see who I’ve chosen and why, then get in touch and let me know if you agree or not.

Full-back
Zak Hardaker
Leeds Rhinos
Why? He’s been described as England’s best full-back by the likes of Jamie Peacock, Daryl Powell, and League Express editor Martyn Sadler. There’s a reason – he’s made countless try-saving tackles, 300 more metres than anyone else in the league, scored six tries, assisted eight others, and bust a whopping 51 tackles. On current form he has to be England’s first choice.
Second choice: Morgan Escare (Catalan Dragons). There have been question marks over his defence but in attack there are few better players in Europe. Indeed, this season he’s made 10 assists and scored 11 tries.

Left wing
Ryan Hall
Leeds Rhinos
Why? He’s among the world’s best wingers without a doubt. In 10 appearances this season, he’s scored 11 tries and made two assists. He is clever, fast, strong and works hard for his team-mates. There is no weakness.
Second choice: Justin Carney (Castleford Tigers). I tried my best to fit him into this side as I rate him very highly, but the stats don’t lie and he has not quite done enough yet to edge Hall and Tom Makinson from the starting 13. The third best in the league, for me, though.

Left centre
Michael Shenton
Castleford Tigers
Why? Still only 27, Shenton has scored nine tries and assisted 10 others in 2014. He is experienced and skilful, and most likely the country’s second best centre on current form.
Second choice: Joel Moon (Leeds Rhinos). The Australian has been linked with a move to the NRL and it’s easy to see why – he’s made 11 assists and scored three tries so far this season. He averages over 20 tackles a game, so gets stuck in, and is a decent metre-maker. Alongside Rhinos team-mate Kallum Watkins, Moon makes up the best centre partnership in the League.

Right centre
Kallum Watkins
Leeds Rhinos
Why? In the words of League Express columnist Garry Schofield, Watkins is the best centre England has produced in several years. He’s fast, strong, skilful and a good finisher. He’s got seven tries and 10 assists this year. Utter class.
Second choice: It’s fair to say no-one else really screams out. Mason Caton-Brown (London Broncos) has a case with six tries and two assists this season, as does Chris Bridge (Warrington Wolves) who is in good form but is currently playing in the halves. Leroy Cudjoe (Huddersfield Giants) is also up there.

Right wing
Thomas Makinson
St Helens
Why? He’s the most prolific try-scorer in the league this year, having crossed the whitewash 14 times. His nearest contenders in the try-scoring stats (Escare and Hall) have 11. Not everyone agrees with his one-handed approach to finishing tough tries but you can’t say it isn’t effective.
Second choice: Joel Monaghan (Warrington Wolves). Arguably one of the classiest wingers in the league and has nine tries to his name this year. There are few others you’d want under a high ball when attacking than the former Australia international.

Stand-off
Kevin Brown
Widnes Vikings
Why? His stats are phenomenal. In 10 appearances this year, he’s scored 10 tries and made nine assists. He’s third in the League Express Goldthorpe Medal table (a season-long award given to the best and most fairest player in Super League) and is the main reason behind Widnes’ impressive start to the season.
Second choice: Travis Burns (Hull Kingston Rovers). This was a tough one but Burns currently leads the Goldthorpe Medal table, which means he’s had more man of the match performances than any other player. It begs the question: what could he achieve at a better team? He has one try, seven assists and 34 goals in 2014.

Scrum-half
Marc Sneyd
Castleford Tigers
Why? The 23-year-old is arguably England’s next great half-back. He has it all, a superb Rugby League brain, an eye for a pass, a top class kicking game, a killer step, and can defend, as he showed against Leeds last week when he pummelled Liam Sutcliffe. He’s made more assists (15) than anyone in the league this year and kicked 45 goals. He’s on a year-loan from Salford and there’s no way Iestyn Harris is going to let him remain at the Tigers once that expires.
Second choice: Luke Walsh (St Helens). Saints are a completely different team with him among their ranks. In nine appearances this year, he’s scored four tries and made five assists, kicking 45 goals along the way. He’s also second in the Goldthorpe standings. It was a close one, but on current form Sneyd has the edge.

Prop forward
Chris Hill
Warrington Wolves
Why? When I named Hill in my hypothetical England team a fortnight ago, I came in for a bit of stick, but the truth is he’s been Warrington’s shining light this season, at least statistically. He’s made 1,524 metres from 201 carries, made 381 tackles, missing only six, assisted two tries and broken 14 tackles. In terms of numbers, he’s done more than any prop bar Jamie Peacock in the league.
Second choice: Andy Lynch (Castleford Tigers). He was run very close by team-mate Craig Huby, Leeds’ Kylie Leuluai and Hull KR wrecking ball Michael Weyman, but his statistics set him apart. He’s made nearly 1,400 metres from 197 carries and missed only five tackles all season.

Hooker
James Roby
St Helens
Why? Simply put, he’s the best hooker in Europe and up there with the best in the world. This season he’s made 437 tackles, 261 carries, 1,478 metres and nine try assists. He’s also scored four of his own. You just can’t pick anyone ahead of him.
Second choice: Daryl Clark (Castleford Tigers). The more I see of this lad the more I like him. He loves to run the ball in and is very evasive. Indeed, he’s made more tackle breaks than anyone else in the league. In five years he should be untouchable. Hull’s Danny Houghton, who leads the league in tackles made with 502, deserves a special mention.

Prop forward
Jamie Peacock
Leeds Rhinos
Why? He’s arguably the best prop England has ever produced and is among the greatest of all time. Few others have boasted his combination of speed, power, fitness and aggression. He is highly thought of by all his peers and any club in the league would welcome him with open arms despite being 36 years old. This season he averages 24 carries, 158 metres and 34 tackles a match. Ludicrious.
Second choice: Alex Walmsley (St Helens). The 24-year-old has started the season superbly and has made more tackle busts than any other prop in the league.

Second row
Liam Farrell
Wigan Warriors
Why? He’s a complete player. He scores tries (he’s got seven this season), makes them (three assists so far in 2014), is superb in defence and doesn’t stop taking the ball in. He is currently injured and Wigan sorely miss him.
Second choice: Sia Soliola (St Helens). Nathan Brown’s reaction to the news he will be heading back to the NRL says it all. He’s scored six tries so far this year, assisted another, made nearly a thousand metres and over 250 tackles.

Second row
Elliot Whitehead
Catalan Dragons
Why? In nine games this year he’s scored nine tries, made one assist, and averaged 32 tackles. He’s essentially been an extra outside back threatening the line whenever he has had the ball. I didn’t pick him in my England side due to his inexperience and Carl Ablett’s versatility, but on current form he’s up there with the best back-rowers in the league.
Second choice: John Bateman (Wigan Warriors). It’s fair to say that the former Bradford star isn’t living up to his potential just yet, but even so he averages 28 tackles, 15 carries and 106 metres per match. He’s also scored twice and made two assists. Wigan fans must be excited at what’s to come from the 20-year-old.

Loose forward
Joe Westerman
Hull FC
Why? It’s more than fair to say Sean O’Loughlin is comfortably the best loose forward in the league, but he has made only five appearances in 2014 and it’s unfair to include him over someone who has been playing week in, week out, like Westerman. The 24-year-old has put himself in with a great chance of an England call up thanks to some brilliant performances. When it comes to having a direct hand in a try he has been unspectacular, scoring once and assisting five times. However, when it comes to putting the ground work in there are few better. In 2014, he’s averaged 22 carries, 122 metres, 37 tackles and three tackle busts a game. Impressive stuff.
Second choice: Kevin Sinfield (Leeds Rhinos) would add some half-back like creativity to the side as well as a sharp kicking game.

Do you agree? Do you have any better suggestions? Let us know on the forum or by joining the social media debate