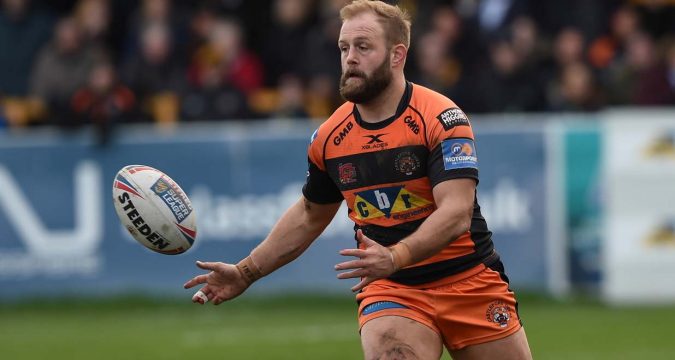 Castleford Tigers won a compelling elimination play-off tonight, edging out Warrington Wolves 12-14 at the Halliwell Jones Stadium on a night that saw Wolves star Blake Austin leave the field at half-time after suffering a knee injury.

In a game that was tightly contested throughout, it was the Tigers’ defence that held out against a largely predictable Warrington attack, with Jordan Rankin a standout for Castleford in front of a disappointing crowd of 5,627.

The game was scoreless until the 28th minute, when Adam Milner touched down a shrews Paul McShane grubber from dummy-half, with Peter Mata’utia adding the goal.

Warrington thought thy had equalised nine minutes later, when Daryl Clark scooted over the line from dummy-half, with referee Chris Kendall recommending a try to video-referee Ben Thaler. But Thaler ruled that Clark had just been unable to ground the ball, while Jake Trueman failed with a drop-goal attempt just before the interval.

Jake Mamo replaced Austin in the second half, and with his first touch of the ball he scored in the left corner, overcoming Greg Minikin and Mata’utia, for Stefan Ratchford to convert from the touchline to level the scores.

But the Tigers took the lead again six minutes later when Ranking was on the end of a smart passing movement to step inside a defender, with Mata’utia’s goal re-establishing a six-point margin.

Liam Watts had a try ruled out by the video referee when he lost the ball on 63 minutes, but three minutes later Mike Cooper conceded a penalty on Watts and Mata’utia’s goal put the Tigers eight points ahead.

But the Wolves got the ball back from a short kick-off and Chris Hill touched down a short grubber from Daryl Clark under the posts, with Ratchford’s goal making it 12-14.

When Watts conceded a penalty with seven minutes to go, just insde the Warrington half, Ratchford went for goal, but his attempt fell short and the Wolves were unable to pull level as the clock counted down.

A full report, photos and analysis of this game will feature in the next edition of League Express