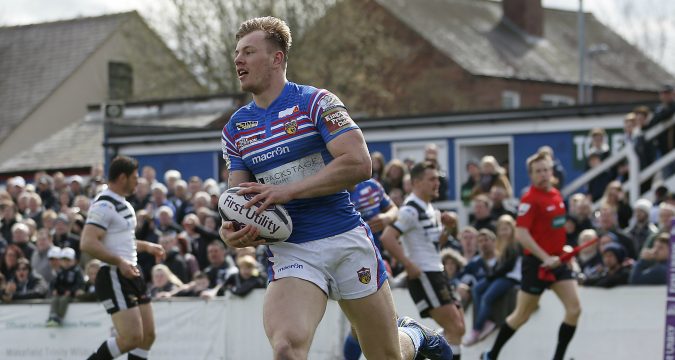 Wakefield coach Chris Chester has revealed that star winger Tom Johnstone looks better than ever as he counts down the days to his return to action – as the club prepare to finally unveil NRL forward Pauli Pauli as a Trinity player in the coming days.

Following the news that Matty Ashurst has signed a new four-year deal with Wakefield last week, League Express understands that Trinity are on the verge of securing a deal for former Parramatta and Newcastle forward Pauli to join ahead of the 2018 season.

Johnstone, meanwhile, is nearing a return from the serious knee injury which prematurely ended his 2017 season. And Chester told League Express this week that he could feature as soon as the Boxing Day friendly at home to West Yorkshire rivals Leeds.

He said: “Tom is ready and raring to go. He’s fit, really fit, in fact.

“He could even play some part in the friendly on Boxing Day but if he doesn’t, then it’s pretty much a guarantee he’ll play in our first friendly in the New Year and take it from there.”

There were perhaps fears that following such a lengthy lay-off and serious injury setback, Johnstone – who had been tipped to become an England international in the coming years – would not return the player he was.

Chester, however, has promised that will not be the case.

“He’s trained really well since he’s been able to get back out there and do stuff,” Chester said.

“It’s been a long journey for the kid, a really tough six or seven months – and he’s looking in seriously good shape.”

And Chester is also hopeful that following a strong debut season for Mason Caton-Brown, as well as another good year for fellow winger Ben Jones-Bishop, Wakefield now have genuine depth and genuine competition for places on the wings – which should bring the best out of everyone.

He said: “It’s good to have him back and good that he’s as good as he was before because there’s some real competition there now.

“With Ben Jones-Bishop and Mason Caton-Brown, as well as Tom, there’s three genuinely good players competing for two places and whoever trains the best will get them. But having Tom back is a major boost.”