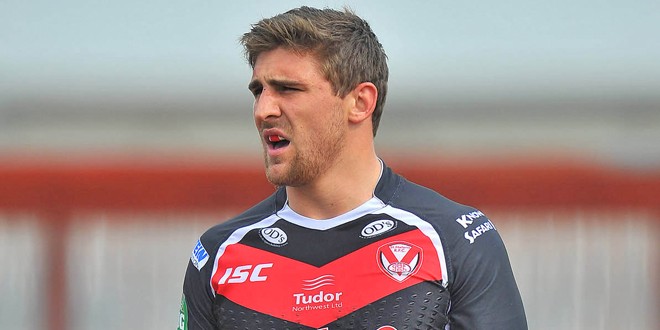 St Helens winger Tom Makinson believes that Saints are legitimately challenging Leeds Rhinos for the title of the club with the best backline in Super League.

The 22-year-old, who scored two tries in a thrilling victory over the Rhinos on Friday night, said: “They [Leeds] definitely set the benchmark.

“They’re tremendous players and that’s what you’ve got to aspire to, but I think we’re doing really well this year.

“They are great players in their own respect but Swifty [Adam Swift], Jonny [Lomax] and I have something a bit different.

“We’re all really skilled and quick, and hopefully we can challenge them to be the best backline in Super League.”

Makinson hinted that the secret of their success could lie in their off-field friendships.

“It’s one of the reasons we work so well. It’s the same with Jordan Turner [Makinson’s centre partner]. When he first joined I didn’t really know him, but over the years we’ve become best friends and you can see our relationship on the field. We know each other inside and out, and it’s the same with me, Swifty and Jonny.”

With an average age of just 22, there is potential for this talented triumvirate to take Saints back to their silverware-winning best and stay there for a long time.

“That’s what all three of us want 100 per cent, but obviously you never know what’s going to happen, you can’t predict the future,” Makinson said.

“We’ve got a solid base with the back line but if you look through the team we’ve got some really good youngsters across the park, so hopefully it’s set for a long, long time.”

With eight four-pointers so far in 2014, Makinson tops Super League’s try-scoring table. He plans to stay there. He said: “At the start of the year I set myself a target to be up there with them [top scorers] and as a winger that’s what you’ve got to be doing, finishing off tries. I think that’s one of the strong points of my game.”

“He’s everything you want in a player and a captain,” he said.

“Both on and off the field he’s a tremendous bloke and I’m over the moon he’s equalled the record. He will go on and play a lot more games. He’s still one of the fittest in the team, and he’s a strong bloke, which he proved on Friday by handing off about seven players to set up one of our tries.

“He’s not as fast as he used to be, but he’s not slow and he’s proving that this year. He’s a great player and an even better bloke.”

Makinson explained how it felt to make such a big contribution to such an important Saints victory on Friday.

“It was a great feeling,” he said.

“Obviously helping my team like I did is something I’m proud of, but I think it was a big team effort. The forwards in particular were brilliant, it was such an end-to-end game, set after set, if anyone won it for us it was the forwards, who did the hard work.

“It was a really important win, every game you want to go and win the two points, but going into that game we knew it was going to be tough but we always have self belief and with the strength in depth we’ve got we can beat any team really.”

Finally, the 22-year-old, discussed goal kicking and his place within the team.

“I’m probably bottom [in the order],” he joked.

“Walshy’s [Luke Walsh] number one, then you’ve got Jonny Lomax at number two, but he’s been carrying a knock in his leg. He’s been playing but he’s not been kicking. Then it’s Jordan Turner, so I’d say I’m probably fourth in the pecking order.”