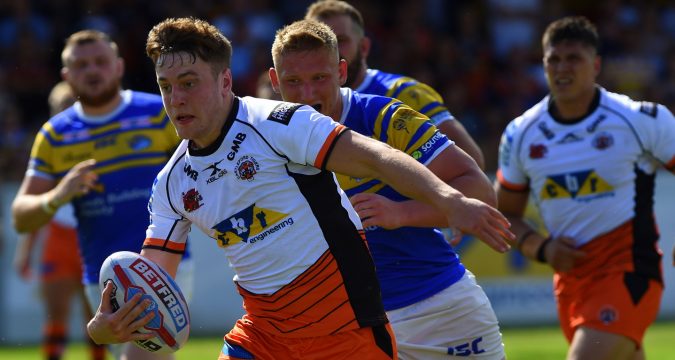 CASTLEFORD TIGERS halfback Jake Trueman has been confirmed as this newspaper’s Albert Goldthorpe Rookie of the Year.

Trueman, 19, wins the award for his outstanding performances for the Tigers this season, both at stand-off half, where he has formed a formidable partnership with three-time Albert Goldthorpe Medal winner Luke Gale, and earlier in the season at fullback.

Turner, a West Bowling junior who came through trhe Bradford Bulls’ Academy system, came into the 2018 season after having made three Super League appearances in 2017. He made his debut on 4 June last year in a 16-12 victory over St Helens, but his second game was when he really came to prominence, scoring three first-half tries in the Tigers’ 20-38 victory against Wigan Warriors at the DW Stadium.

The qualification to be regarded as a rookie is to have played fewer than ten Super League games before the start of the season, and Trueman qualified comfortably. And this season he has secured a first-team place while still a teenager, playing in 27 of the Tigers’ 30 matches.

Now he is hoping another top performance at Wigan when the Tigers head to Wigan this Friday in the second Super League semi-final.

“I do enjoy playing at the DW Stadium and it was good to get out there last year and score some tries. I wasn’t as nervous as I thought I would be,” Trueman told League Express while admitting that he’s delighted to be playing alongside Gale after the latter’s injury problems earlier in the season.

“I like playing with Galey because he is an organising halfback and he runs the game and controls everything. He takes the pressure off me. I like playing off the cuff and running with the ball.”

And Trueman admits that one of the positive things about joining Castleford has been the tuition he’s received in halfback play from Daryl Powell’s assistant coaches Ryan Sheridan and Danny Orr, both of whom excelled in that position in their playing days.

“It’s a massive advantage. I don’t think I would have been as ready as I have been without their help.

“Ryan in particular does a lot of work with me. It’s so important. You don’t win anything without effective halfbacks.”

Trueman didn’t play in last year’s Grand Final, but he is confident that the Tigers can go one better than their Old Trafford defeat in 2017.

“We have made some good signings mid-season this year and we are in good shape to win it,” he added.

“Peter Matau’tia is a solid player who knows what he is about and he’s really strengthened us at fullback.

“We have had a couple of months to get out combinations right.

“It would be a good final against St Helens but we can’t afford to look too far ahear.

“Wigan will be pumped up and they are good at getting pumped up for one-off games. We will just have to match them.”

The Albert Goldthorpe Rookie of the Year is presented with a solid silver medal and a cash prize of £500.