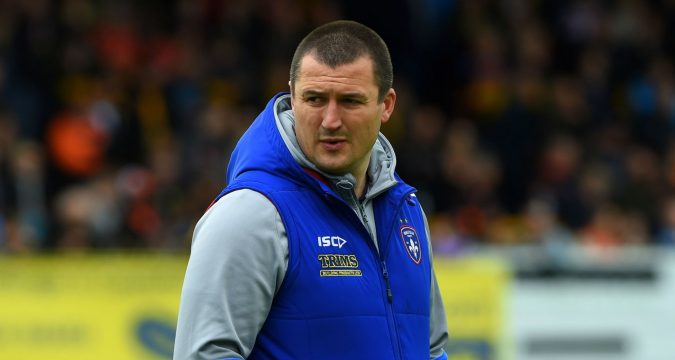 Wakefield Trinity coach Chris Chester has told TotalRL that they will buck the trend and become one of just a few sides to use reserve grade in 2018.

At a time when several Super League clubs are scaling back and withdrawing from running reserve teams, Wakefield will actually introduce a side to compete in the competition this year.

Chester explained the reasoning behind the decision to TotalRL – before insisting the sport has to act and make it compulsory by the end of this year.

“We’re going with a reserve grade team this year. We’ve applied and it’s been granted, so. we’ll roll with it,” he said. “I’d like to see it made compulsory for every Super League team.

“There’s only ourselves, Wigan and St Helens in Super League – then Halifax, Keighley and another Championship side going with it, which is disappointing. We’ll run with it though, we’re looking forward to it and we’ll continue to do so. Hopefully they make it compulsory by the end of this season because that would be a logical move from here, surely.”

With the depth of his squad this year, Chester believes Trinity are finally in a position to introduce the structure themselves, explaining the player pools his reserve teams will be comprised from – as well as the benefits for Wakefield themselves.

He said: “We’ve got four or five young kids, and there’ll be six or seven who miss out every week barring injuries. The rest? We’ll top up with kids from our Academy.

“We thought it was really important to go with a reserve grade. It gives us that opportunity to keep a closer eye on the players. We shipped a few out to Oxford and Dewsbury and it’s not until halfway through the week when you get the footage and you can sit down and go through things with them.

“With a reserve grade that’s easier. We get to be all over what they’re doing. It’s just a huge positive and a must in my eyes.”

Trinity will, however, continue their links with Championship side Dewsbury too, Chester confirmed. Players such as Jordan Crowther are expected to feature for the Rams in the opening weeks of the season.