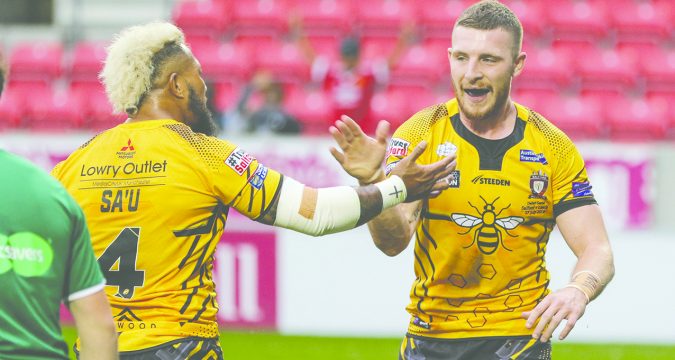 Wigan Warriors’ pursuit of Jackson Hastings hangs in the balance as a decision over his future looms.

The Warriors are keen to land the Salford halfback and have offered him a deal to join the club next season.

But League Express understands that the two parties are struggling to come to terms on the length of the contract.

It’s believed Wigan have offered the Australian a two-year deal to join the club, but the 22-year-old is adamant he only wants to commit to a one-year deal.

As a result, there is growing optimism at Salford that they will be able to retain their prized asset, with the Red Devils more than happy to offer the 22-year-old the shorter contract that he is chasing.

His future is set to be decided in the coming weeks, with Wigan currently considering what route to go down. Should the club decide to offer him a one-year deal, it would see them likely land their target. However, it would make their long-term recruitment harder to plan under Shaun Edwards with Hastings free to leave at the end of next season.

It’s believed Hastings is keen to pen on a one-year contract to widen his chances of an NRL return in the future, with his performances in Super League so far likely to catch the eye of potential suitors Down Under.His

impact on Salford was evident last week as the Red Devils snapped their two-game losing streak with a win over Toulouse, which saw them secure their Super League status. Hastings had played in neither of those games due to suspension, but Salford have won all six games he has featured in since joining the club earlier this year.