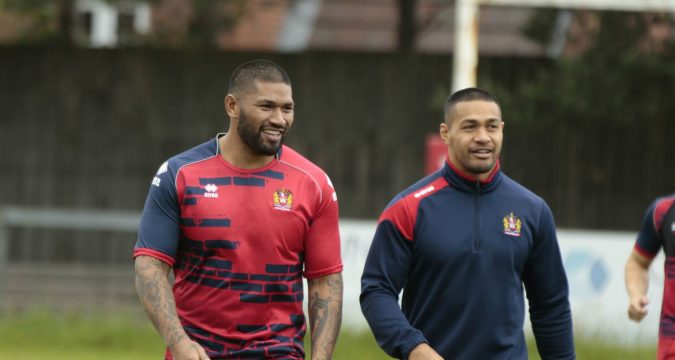 This story first appeared in Monday’s edition of League Express. To ensure you get news like this as soon as the paper is released on a Sunday night, click here to start your digital subscription and have the paper delivered to your smart device every Sunday night!

Wigan prop Frank-Paul Nu’uausala has called for the Easter fixture list to change in the future to lighten the load on players.

Nu’uausala was playing in his first Easter programme after joining the Warriors from Canberra in June last year. The front-rower played in the win over St Helens on Good Friday and then backed up two days later in the victory against Wakefield on Easter Monday.

Nu’uausala acknowledges the history of the Easter schedule but believes it needs a re-think for 2018. “I don’t know how I’m feeling, I’m 30 years old,” he admitted.

“I played on Friday and then Monday. In the NRL that’s unheard of. And I felt sorry for the boys over here because they do put their body on the line and don’t get rewarded. We have no players’ association, so we play a lot of games. I know they’ve been doing it for 20 years or even longer, but the game’s changing. It’s more professional.”

The Kiwi says Super League needs to look at player welfare and the impact such a short turnaround can have.

“It’s a brutal game,” he said. “No one goes in half-hearted, you have to go in full-hearted. So I don’t know how the boys get through it, it’s just mental.

“Hopefully it will change in the next couple of years because if something does happen really seriously to a player they can take them to court. There’s proof that it’s not [good]. It’s okay for other sports that don’t have as much contact but ours is all about contact and putting your body on the line.”

Nu’uausala praised the work done by Wigan’s medical and conditioning staff to help their players recover. But the forward believes the RFL is playing with fire with regard to the health of players with a packed Easter programme.

“Fans will probably blow up about why we’re not playing our best, why we look so lethargic,” he said. “But come on we played on Friday against St Helens in a big derby. It’s just hard to back up. It’s just mental, you have to go back to your processes. But I’m glad no one got seriously injured.”