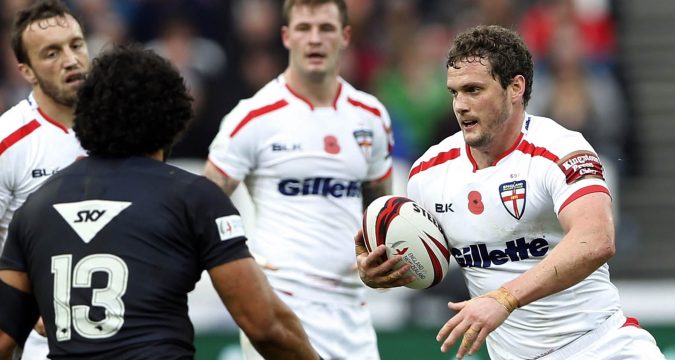 Sean O’Loughlin admits that he worried the opportunity to captain England in a World Cup had passed him by – but he insists that, ahead of Friday’s opener against Australia, they are targeting nothing less than winning the whole competition.

At the age of 34, O’Loughlin will lead England in this weekend’s game against Australia in Melbourne – just 12 months on from missing last year’s Four Nations due to injury.

The Wigan captain concedes that, with the armband going to Sam Burgess this time last year, he had wondered if he would ever reclaim it – but says the likes of Burgess and James Graham will make it easier for him as skipper.

When asked if he thought he had lost the captaincy permanently, he said: “Yeah, to some extent. But if it had it would not have been a disappointment.

“There are so many boys in there who could do the job as well, not just Sam. There are a lot of experienced lads in there who do it regularly at their clubs and know what it’s about.

“To get the nod, having those boys around you makes it an easier job to do.”

O’Loughlin also revealed England’s lofty ambitions for the next six weeks – while admitting victory this weekend would lay down a real marker to the rest of the field about England’s chances.

“Our focus is to go there and win it,” he said. “We clearly understand how tough a task that is. The Australians and the Kiwis are tough teams to beat, but if we didn’t set our sights that high we would be disappointed. So we are setting our sights to go and win it.

“Both sides will probably be a little cold, and we’ve got a week and a half to get some quality on the field. If we go over and win that game we can real set a benchmark for what we are about and what we want to achieve.”

O’Loughlin also admitted how being handed the armband back by Wayne Bennett was an enormous boost for his own personal confidence ahead of the tournament.

“To have someone of his calibre come in and give you the nod was a good feeling,” he said.

“I have had years where I have been in and been out so for me it was just about making sure I was ready to go for this one. I finished with a little niggle at the end of the year with Wigan but I am in good shape now and to get the nod for the captaincy is always going to be a privilege.”