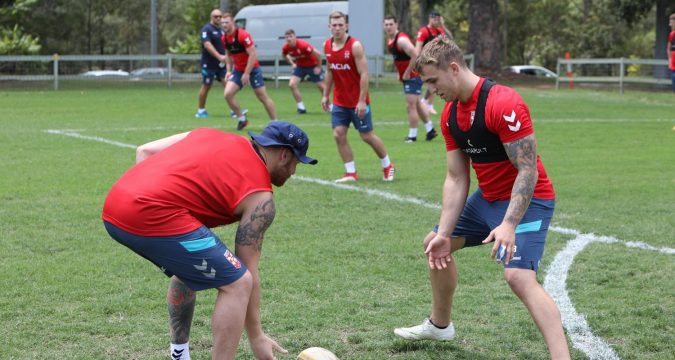 If there was ever a moment which underlined just how great a step into the unknown England’s next generation are taking this autumn, it probably came from the straight-talking, no-nonsense mouth of the man who will lead them over the next month or so.

“The first venue we’ll play at at in Lae makes Castleford look like Wembley!” laughed proud Castleford lad Paul Anderson last week, prior to England Knights departing for the other side of the world. In many ways, experiences and tours like the one the newly-revived Knights are embarking on are what the concept was revived for earlier this year. After a week in Australia, on Thursday, they will head to Papua New Guinea for a two-match series against the Kumuls – which will involve circumstances barely any of Anderson’s youthful Knights have ever experienced before.

“This is a bit different to what they’re used to,” Anderson explains with a wry grin. “You have to see the pictures we took when we went out there earlier this year to believe it. We’ve scared them to death telling them about PNG as a country. The exposures and different things we’ll see all means if we don’t get anything out of it then we will be kidding ourselves.”

Spearheaded by England rugby director Kevin Sinfield, it does not take long to learn that the return of the Knights is about creating better people, as well as better players. There is no doubting a young, exciting squad will be tested on the field against a Kumuls side who are notoriously tough to beat at home, but away from game-day, there will be life lessons and challenges in a place unlike many others on the rugby league landscape that will be just as important. And one man who can testify to that is one of Anderson’s support staff – who, 22 years ago, made his own international debut in Lae, where the Knights kick off their series against the Kumuls on Saturday. “It was an experience, I can tell you that,” recalls former Great Britain captain Paul Sculthorpe. The former St Helens forward would go on and become one of international rugby’s greatest-ever talents, but it was in Papua New Guinea where it all began for him.

And as Anderson has been keen to point out to his younger players, the challenges surrounding touring such a unique place as a teenager were just as career-defining for Sculthorpe over two decades ago as they will be now.

“We were told how primitive a place it is and it will be something you’d never experienced before, but nothing can really prepare you for it,” he admits. “Things like the hotel, it’s just on complete lockdown – certainly in places like Lae. Lae and Port Moresby are very different places to be honest, but my memories of being in Lae is that there was no going out in groups to the nearest coffee shop or bar – you’re in your hotel, and that’s where you stay apart from when you go off to training.

“You get changed there, you get massaged there, get on the bus and train – but after that, you run back to the bus and go back to the hotel. It’s a step into the unknown for these guys, PNG people are very passionate about our game, and they chase after the bus wanting your training gear! It’s a great life experience; it’s a challenge but I enjoyed it and I’m sure they will too.”

And while Anderson and his staff have done their best to put the players on edge so as to stiffen them up for what they will experience, for some, it is an opportunity they are relishing as the Knights take an important step outside of their comfort zone.

“I’ve been to South Africa before – and looking at a few of the videos the NRL have put out, it reminds me a little bit of the conditions there,” explains Hull KR’s Chris Atkin, who will start alongside Declan Patton in the halves in Lae on Saturday. “But I do think it will be something everyone will be surprised by, and it’s an exciting challenge for us all. We’ve spoken about the culture and I’m really excited about going to see that and experience that – as well as playing rugby.”

Sculthorpe also admits that even aside from what awaits them in Papua New Guinea, the opportunity to tour and play away from home on a prolonged basis simply does not happen enough for younger players nowadays – making this all the more important. “With London being out of Super League for a while, and most teams doing the Catalans trip on the day, players these days don’t spend time together in hotels and away from home,” Sculthorpe says.

“It’s going to be great for their development to go through. I still look back on it as very important. I was on the bench for that game in Lae, but two minutes in, Chris Joynt got a cut and I was thrown on in the deep end, so to speak. But I did okay, and got a starting shirt for the rest of the tour. For these lads, we want to see them take the next step on from Super League and see who can make it.” Sinfield and the RFL have made a commitment to the Knights programme right the way through to the 2021 World Cup, and Anderson admits there are already irons in the fire for future tours and future opportunities to play other nations. “The more successful we are though,” he explains, “the fewer people will want to play us! But this is great for us all – and we already know we want to do more of it.”

It is players like Atkin – who was teaching full-time while playing part-time with Swinton 18 months ago – who the reformation of the Knights will benefit the most, you suspect – offering them vital exposure to the international arena before making the potential step up to the senior side with Wayne Bennett. “It’s been a whirlwind 18 months, but I’m not going to rest on it now,” he insists. “When Paul (Anderson) rang me early in the year, he explained a little about it – and in the first meeting we got together, they explained why they brought it back and the principles behind it.”

“The Knights have been put back together in mind for the next World Cup, and we’re hoping they’re going to be seasoned internationals by then. It’s an opportunity for them to say they can handle this environment.” And if even one or two of them emerge through this tour and become anywhere near the player Sculthorpe became following his unforgettable PNG debut, England won’t be in too bad a shape whatsoever moving forward.