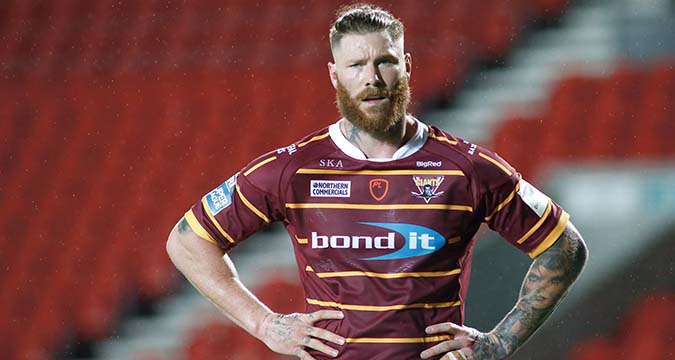 Huddersfield’s plans for the 2021 season have been boosted by the retention of England international Chris McQueen.

The State of Origin representative has signed a new one-year contract with the Giants following an impressive short-term stint with the club.

McQueen, 33, joined the club on a short-term deal post-lockdown in the hope of earning a longer deal, and his performances have been rewarded by the Giants after a string of solid displays.

An NRL champion with South Sydney Rabbitohs, he has scored twice in eight games for the Giants.

“I’m very excited and very proud to extend my contract.

“Obviously, I came over here on a short term contract, my intention was to come over here and play some good footy and fit in with the squad and get the contract extension and that’s what’s happened.

“I want success on the field and I want to play finals football. I want to see the Giants back on top, I’ve had a lot of success in my career and I want to bring some of it back here to this great club.”

Huddersfield, who have been strongly linked with Ian Watson over their vacant head coach position, have also added James Cunningham to their squad for next season.

The club’s Managing Director, Richard Thewlis, added: “Chris came to us on a trial basis with an understanding that we would like to retain him next year should things work out and I think everyone would agree that they have.

“He has been selected in every game possible and played virtually every minute establishing his position in the team with consistent, quality performances. In all the conversations I have had with prospective coaches they all said what a fine player he is and a key part of our pack who they would want to see remain at the club should they get the position.

“The plaudits from our current coaches too are highly complementary for Chris both as a player and a person and this news will go down very well within the group. He will return to Australia for his break upon the completion of our season and come back to us in the new year to start pre-season training.”