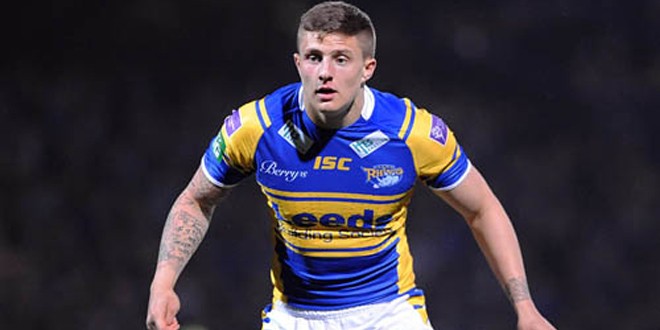 Leeds Rhinos stand-off Liam Sutcliffe knows he has a battle on his hands if he is to build on his 18 Super League appearances in 2013.

The 19-year-old was handed his debut against St Helens last May and then kept hold of his spot in Brian McDermott’s side until the end of the season. For most of that time Sutcliffe was providing cover for broken-leg victim Danny McGuire.

With McGuire now fit and likely to take one starting spot in the halves, Sutcliffe is aware that he might need to bide his time for more first-team action.

“Looking back, I could never have expected to have had the year that I had,” Sutcliffe told League Express.

“At the start of last season I was just hoping to get the one game and mainly concentrate on the under-19s, so when I got my debut I thought that would be my only game. I never realised I’d then play all the season.

“I took a lot out of those games and I’m hoping I did enough to keep a spot in the squad even with Danny back.

“I’m not expecting to get 18 games again. I am still only 19 so I will keep my head down and train hard and hopefully, when the season comes around, I can get a few games under my belt and build on what I did last year.

“Leeds have a lot of great players, so if I’m not picked I’ll not get upset or sulk about it. I will just keep working hard and try and get in the following week.”

Sutcliffe’s performances last year not only impressed those involved with Leeds Rhinos. He also caught the eyes of supporters across the game, being named this week as Young Player of the Year in this newspaper’s annual Readers Poll.

He claimed 22 percent of what was the tightest vote in the whole poll, topping the category over Adam Swift (St Helens), Ben Currie (Warrington), Jamie Shaul (Hull FC) and Theo Fages (Salford).

“With the number of young players that have come through this year I wasn’t expecting this at all,” added Sutcliffe.

“Watching games last year I saw all the other four nominees play and they were all outstanding. Any one of them could have won this.

“It is nice when fans of the game, not just those of your own club, recognise what you have done and think you deserve something like this.

“It is a bit of a shock that I have won, but I do feel privileged to be the winner.”

At the opposite end of the scale, Jamie Peacock took just over half the votes in the Mature Player of the Year category. This will come as little surprise to most people involved in the game, and Sutcliffe is no exception.

“Jamie is an absolute machine,” added the teenager, speaking about a team-mate who is old enough to be his father.

“I didn’t realise how good he actually was until I played alongside him. The stuff he does on and off the pitch as a player and a leader is unbelievable.

“To be able to look up to someone like him in training and get advice from him can only help me for the future as I look to make a mark on the game.”