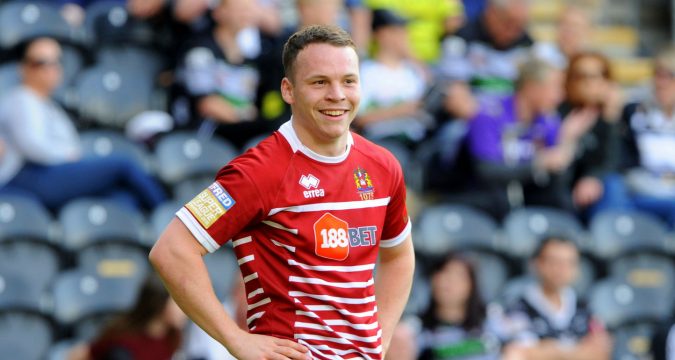 Liam Marshall scored a hat-trick and Joe Greenwood made his debut from the bench as Wigan proved far too strong for Leeds Rhinos tonight at the DW Stadium, winning 46-8 and condemning the Rhinos to their seventh successive Super League defeat.

If Huddersfield Giants and Catalans Dragons can with their games this weekend against Hull Kingston Rovers and Castleford Tigers respectively, it means that Leeds will fall into the bottom four, with just four rounds of fixtures until the commencement of the Super 8s

Wigan were 22-4 up at half-time, thanks to two superbly executed tries from Marshall and one from Josh Woods, who was playing at stand-off for the injured George Williams.

Sam Tomkins added five goals in the first half, after the Rhinos had taken an early lead with an unconverted try by Brett Ferres.

The Warriors added four further tries in the second half from Liam Farrell, Thomas Leuluai, Tom Davies and Marshall, who completed his hat-trick after Jack Ormondroyd passed the ball to Tomkins, who put Morgan Escare into a gap, with Marshall popping up to complete his hat-trick in a performance that suggests that Wigan have well and truly come through their spell of bad form.