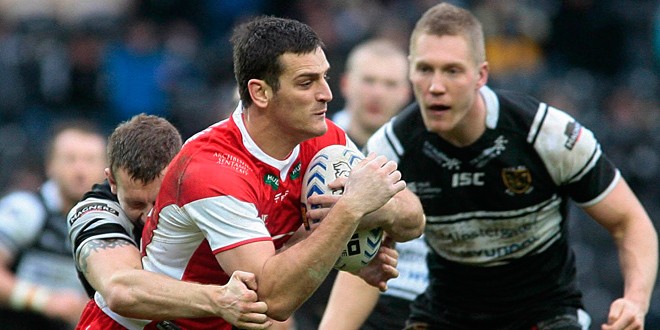 In a nutshell
Hull Kingston Rovers waited until the final minute of the game for Craig Hall to land a field-goal to finally kill off a strong challenge from Hull FC.

How it unfolded
In a game that saw several tries controversially disallowed, the Black and Whites took the lead after 12 minutes, when Jordan Rankin crossed for a try that Richard Whiting couldn’t convert.

The Robins were level three minutes later, however, when French loan signing Kevin Larroyer scored from a great pass by Travis Burns, although Burns could not add the conversion.

Rovers prop Michael Weyman then scored his third try in two games, when he burst over the line with great leg drive after a pass from Hodgson, and this time Burns added the goal to give Rovers a 10-point lead.

Josh Bowden scored an early second-half try for Hull after a short pass from Liam Watts that the Robins’ supporters thought had gone forward, and Whiting’s goal levelled the scores.

But then Graeme Horne scored two tries for the Robins in three minutes, and, with Burns converting one, the game looked to be in the pocket of the Red & Whites on three-quarter time.

But Hull stormed back into the game, with Danny Houghton touching down from dummy-half and Whiting added the goal, and they were level when Fetuli Talanoa scored on the left when clever play by Richard Horne led to a break by Kirk Yeaman. Whiting couldn’t add the goal from the touchline.

And in the final minutes of the game Burns missed a field-goal attempt, but Hall was finally successful to give the Robins a thrilling derby victory.