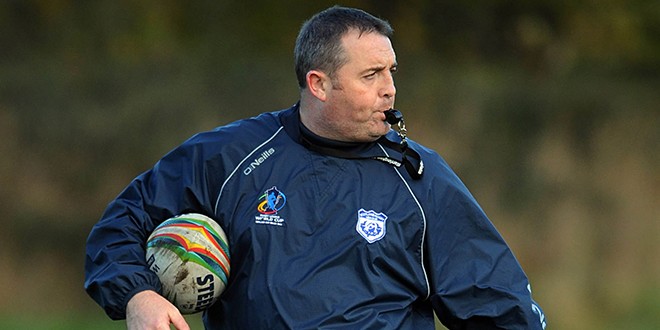 Scotland boss Steve McCormack said he would consider coaching a Celtic side featuring players from Scotland, Wales and Ireland against England as a way to prepare and select the Great Britain team for 2015.

In last week’s League Express, editor Martyn Sadler proposed a State-of-Origin-like clash between England and the Celtic nations to replace the Exiles match that has featured in mid-season in recent years, claiming that it would serve as great preparation for selecting the Great Britain team for the proposed Ashes tour in 2015 and that McCormack would be the perfect man to coach the side.

“In principle, it’s a great idea,” said McCormack, who recently guided Scotland to the quarter-finals of the World Cup, but who lacks any other current role in the game.

“Look at the Irish team, my team, the Welsh team, there are some outstanding young players in there that we could put together to compete against England.

“I think it would be a good way to pick the Great Britain team.”
The former Salford coach did voice some concern, though. He wants to ensure the Celtic nations still get to play in the European Championship after the end of the Super League season.

“The important part of this would be that you would still need to have the Scotland, Wales, France and Ireland games at the end of the year,” added McCormack.

“From a Scotland point of view – I can’t speak for the other coaches – we need those games to be able to compete. We still need to have those, and maybe the winner of our tournament can get into the big leagues with regards to playing England, Australia and New Zealand in the Four Nations next time they are held in the northern hemisphere.

“But in mid-season I certainly think the team we could pick from the Celtic nations would be an outstanding side.”

As for his credentials for being selected to coach the side, McCormack was typically modest.

“Whether I’m the right man for the job is for others to decide, although it is nice to be linked with things like this.

“I would like to do it yes, but I’m sure if you asked Mark Aston and Iestyn Harris they’d say exactly the same thing.

“I don’t really want the headline to say I want the job. But I think the concept is a good one and if the job was offered I would certainly sit down and discuss it, just like, I’m sure, the other Celtic nations would.”

An RFL spokesman confirmed to the RFL that a midweek slot in June is potentially available, but that the RFL has yet to decide on the nature of a mid-season international for England.

England coach Steve McNamara also admits that he can see some merit in the idea of a game against the combined Scots, Welsh and Irish.

“I would consider any idea that would get the England brand out on the field again,” McNamara told League Express.

“If I’m being honest it would ideally be a re-run of England and New Zealand. We don’t want to lose the momentum generated by the World Cup, and for us to improve we have to improve the standard of competition for all our players.

“We have to find ways of having more games like England-New Zealand, and I think the Celtic nations is an interesting idea.”