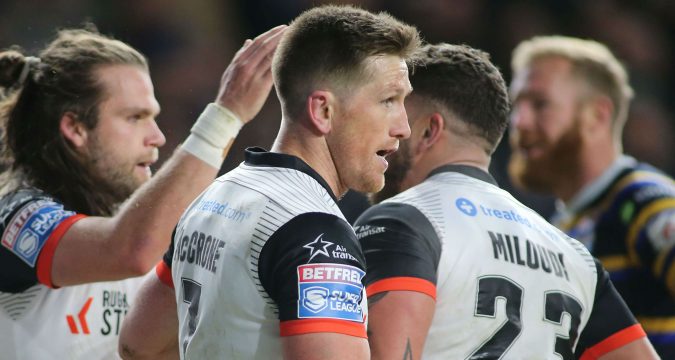 Toronto Wolfpack captain Josh McCrone has spoken out in favour of the club retaining its Super League place next season, despite the fact that the club still owes him part of his salary for the current season.

“The last few months have been challenging, and 2020 is a year that will not easily be forgotten,” said McCrone.

“As a Toronto Wolfpack player I have experienced something that I have never had to deal with before.

“When David Argyle made his decision to pull out of the club, it left myself and many of my mates in limbo and suffering extreme financial hardship. Many of the boys have found temporary new clubs to go to, some of us have started alternative work and the majority have stuck in there because we genuinely believe that there is a real opportunity for the Super League to expand in Toronto.

“We have experienced first hand how Canadian fans have taken to Rugby League. The city of Toronto loves sport and they extended their love to the Wolfpack. The game day excitement is something I have never seen before in Rugby League. The atmosphere at a sold-out Lamport stadium is infectious. It is hugely disappointing that every Super League team, and their fans, did not get to experience it for themselves this year.”

McCrone accepts that the club has been partly at fault for its own predicament, but he has no regrets about having joined it.

“As captain of this club I have had many dealings with David Argyle. I was personally very disappointed in how he misled us, and it has left a sour taste in my mouth. However even with the turbulence of the last several months I would not go back and change my decision to join this club. It is more than one person, it has become our family. It has so much to offer not just to the Super League but to the game of rugby league as a whole.

“I know I am not the only one excited by news of the potential new wolfgrooming.com investment group. The group has a proven track record, a sound plan going forward and importantly the integrity to meet the payroll commitments for 2020. This suggests they are built on strong morals.

“I understand both the Super League and the RFL have to do their due diligence to ensure we never find ourselves in this same situation again. However, this remains a unique opportunity to grow the greatest game in the world, in one of the greatest cities in the world.

“If we do get the green light from the authorities, I would be proud to pull on the Wolfpack jersey and lead my club through the season in 2021. I feared this opportunity might not arise, but under our new ownership I really hope it does, and that the decision made by our fellow clubs will be a positive one.