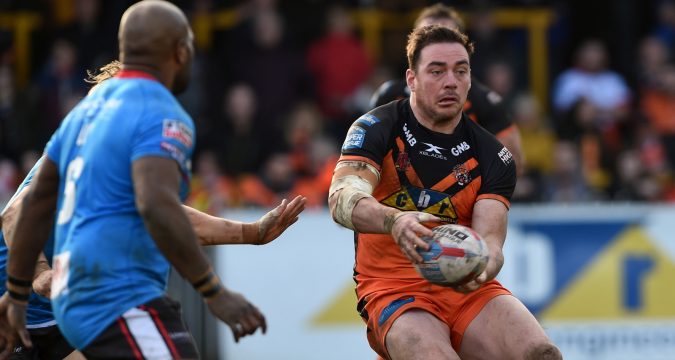 Castleford forward Grant Millington believes his front-row partner Liam Watts is going to be subject to ‘tactics’ to get him in trouble on his return to Hull this afternoon – but he has backed the prop to cope with it.

Watts returns to the KCOM Stadium for the first time since leaving Hull and joining his boyhood club later today, when the Tigers aim to solidify their position inside the top four with victory over the Black and Whites.

And while Millington admits Watts and Castleford are aware there will be ploys to try and get the prop into trouble after a tumultuous ending to his time at Hull, he believes Watts can cope.

“Hopefully he knows what to do, but you’re right, I think they will have a dig at him because he’s been in little bits of trouble before, which is part of the reason why he left initially I guess,” he said.

“It’s definitely going to be a tactic of theirs to try and get him off the pitch because he’s such a good player, but he’ll know in the back of his mind that they’re going to do that and he’s just got to keep his cool and not play their games.”

Millington also insists Watts has been a fantastic addition to the Tigers’ pack since his arrival earlier this season.

“We were sitting in video earlier this week and I was asking him if it feels strange preparing to play your old side – and he said not really.

“It feels like he’s been here for quite a while and he’s put that past behind him and moved on already. He’s moved forward and is committed to doing his best for us, but I’m sure in the back of his mind it will be a big occasion for him to go and steal two points over there.”

The Tigers head across to Hull without scrum-half Luke Gale – though Millington has stopped short of completely putting his hand up to fill in at half-back like he has in the past!

“Definitely not!” he laughed.

“Look, I don’t mind slotting into the halves but I think there’s a few more players to go down yet before we get to that point. I’ve said before that I don’t mind playing in the halves if you get pushed in there in the middle of a game, but I don’t fancy being pushed in from the start, having a whole week of training there and having that pressure of getting a side through a game.

“We’ve got a few options there; we’ve still got Macca (Paul McShane), Truey (Jake Trueman) and Cory Aston too, so there’s people who can play there – it’s just a matter of putting the puzzle together and making it all gel and work.”