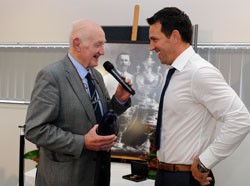 The immense contribution made by Ray French MBE to Rugby League, especially at Wembley, will be recognised at the first AB Sundecks 1895 Cup Final between Sheffield Eagles and Widnes Vikings on Saturday August 24.

The player of the match will receive the Ray French Award, after a poll of Our League members in which the much-loved former dual code international and BBC commentator received more than 60% of the votes.

The 1895 Cup is a new competition that has been introduced in 2019 to provide an additional and more realistic opportunity for non-Super League clubs to reach Wembley on Challenge Cup Final day.

Unlike the Lance Todd Trophy, the long-established man of the match award for the Challenge Cup Final which is determined by votes from members of the Rugby League Writers and Broadcasters Association, the winner of the Ray French Award will be chosen by the supporters – through another Our League poll conducted during the match.

Ray was a Wembley winner with his hometown club St Helens against Wigan in 1966, and went on to commentate on 27 Challenge Cup Finals for the BBC, the majority at Wembley.

Fittingly, the Ray French Award will be presented for the first time at Wembley on Saturday week when both of his former clubs, St Helens and Widnes, will be in action.

Saints will be making their first Challenge Cup Final appearance since 2008 against Warrington, and that match will be followed by Widnes’s return to Wembley after a 26-year absence.

Ralph Rimmer, the chief executive of the Rugby Football League, said: “Naming this award after Ray French provides us with the opportunity to recognise the outstanding contribution he has made to the game, at all levels.

“He is respected as a former player, and loved throughout Rugby League and well beyond for providing the commentary to so many great Wembley moments.

“That stature has been confirmed by the Our League members in this poll, and I’m sure the announcement of this award will be warmly welcomed by the Rugby League family.

“It will be a pleasure as always to welcome Ray at Wembley, and to see him presenting the player of the match in the first 1895 Cup Final – with an award named in his honour.”