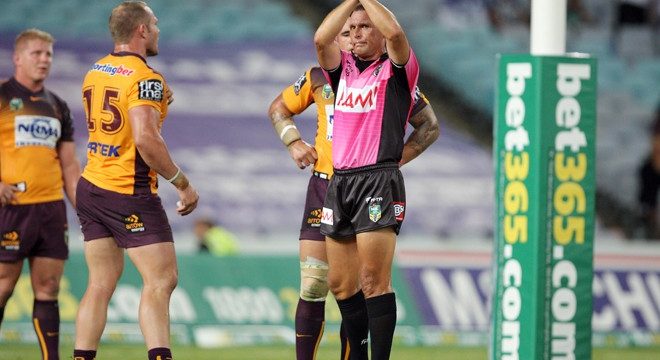 Essentially, it is the 64 million dollar question which has plagued Rugby League for the last 25 years.

Why on Earth can’t this fantastic game – which we would all probably agree is the most exciting sport out there – get a foothold amongst the mainstream in Great Britain? After all, for entertainment and drama, there isn’t really another sport like it.

In all honesty, if you asked 100 fans of the game that question, you would likely get about 10 or 20 different responses. Like any other sport, there are things Rugby League can do better in order to increase its reputation. But it’s off the back of the news emerging from Australia this week that makes you realise the game is once again shooting itself in the foot with dramatic effect.

The two referees system – used in the NRL for a number of years now – has been seen as a novel idea to some, but whilst it is only being rolled out on one side of the globe, the chasm between Super League, NRL and international RL is getting bigger and bigger. There seemed to be a light at the end of the tunnel earlier this year, when the two ref system was trialled in U19 games involving Super League clubs, with a view to the system being incorporated for 2015.

But just as the English game starts to get its head around this most dramatic of refereeing shifts, the NRL have revealed they are looking into the prospect of perhaps using a THIRD referee from 2016. The more sceptical Rugby League fan would believe that this only confirms the NRL have no interest in developing the game on a wider scale, but regardless of that train of thought, it’s a very worrying state of affairs.

We’re rapidly heading down a road where the rules in the NRL and Super League are getting more and more different by the day. The NRL are proposing a whole host of changes to their game which will widen the gap between the two leagues, with the third referee just the tip of the iceberg. And that only acts as a huge grenade in the face of the international game – which is still the pinnacle of our sport. Not enough due care and attention gets deflected towards international Rugby League – and with news like this coming out of Australia, it’s easy to see how much it’s being neglected.

Could you even imagine a world where the Premier League and Serie A (Italy’s top football league) played with rules as different as Super League and the NRL’s? It would have a far-reaching impact on the game all across the globe, with confusion reigning supreme when it comes to major international tournaments. Do those that matter even care about international Rugby League anymore?

Some sympathy must be extended the way of the Rugby League International Federation, who are being pulled in two different directions by two very strong parties. But they have to put some sort of stamp on this situation, and come to an agreement with both parties over major rule changes. The international game has been suffering because of this for too long, and something has to be done sooner, rather than later.

The longer the NRL continue to make sweeping changes without a care for the rest of the game, the more international Rugby League is going to be affected. This is our major Achilles’ heel – and we’re doing all the damage to ourselves.