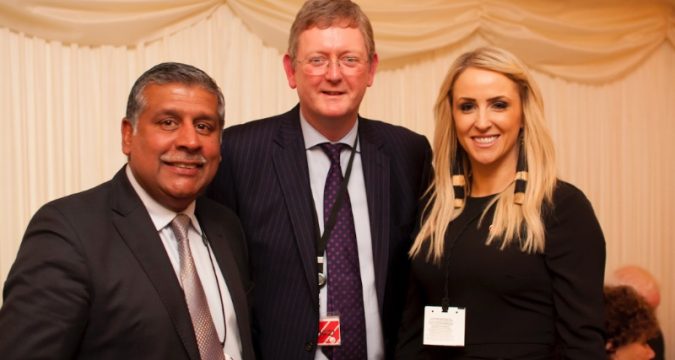 The All-Party Parliamentary Rugby League Group held its annual dinner last night (20 November) and voted Castleford Tigers’ star Luke Gale, who has already won the Albert Goldthorpe Medal and the Steve Prescott Man of Steel Award, as their Player of the Year for 2017.

The dinner was hosted by the Group’s President, Lord Hoyle, on the House of Lords terrace, and brought together Members of both Houses of Parliament, Honorary and Associate Members, Group supporters and sponsors Kingstone Press and The RFL.

Speaking at the dinner Group Chair, Judith Cummins MP, said, “Despite this year’s general election, the Group has continued to be active in standing up for the sport, raising and challenging issues and speaking up for rugby league in Parliament at every opportunity.

“The Group is thankful to associate members for their continued input, and particularly to Group sponsors Kingstone Press and The RFL for their ongoing support.

“We are passionate about rugby league at all levels, and with 2018 marking the Group’s 30th anniversary, we look forward to continuing to support rugby league wherever we can.”

Throughout the evening, attendees were encouraged to take part in a silent auction and raffle, and by the end of the evening the Group was able to announce a donation for charity partner, Rugby League Cares, of £2353.

Those in attendance also heard from guest speaker, former Leeds, Bradford, St Helens, England and Great Britain star, Paul Anderson. Anderson is part of the England coaching set up, and discussed his career as a player and coach, as well as his thoughts on the women’s and men’s Rugby League World Cup.

The highlight of the evening was the Group awards. The winner of the Group’s 2017 Super League Player of the Year award was announced as Castleford Tigers and England halfback Luke Gale. Gale was instrumental in a season that saw Castleford claim the League Leaders’ Shield and reach the Super League Grand Final, scoring 14 tries and 145 goals in 30 appearances.

The Geoff Lofthouse Award, named after one of the late founders and long-standing Chair of the Group, was made to Dave Hadfield. Dave has been heavily involved in the sport as a rugby league journalist for almost 40 years and has travelled the world to cover the game that he first fell in love with at school. An inspiration to many in the Rugby League press, he has authored a number of books on the game and broadcast extensively.

The Group announced four more new Honorary Life Members: Angela Powers, a reporter and presenter of Sky Sports’ rugby league programmes for over 20 years who established Her Rugby League in 2013 to highlight and promote women in the sport; Garry Schofield, the 1990 Golden Boot winner and joint most-capped Great Britain player of all time; Lizzie Jones, in recognition of her tireless campaigning and work to set up the Danny Jones Defibrilator Fund; and Jas Athwal, Bradford Bulls Chair who pioneered rugby league within the Asian community.