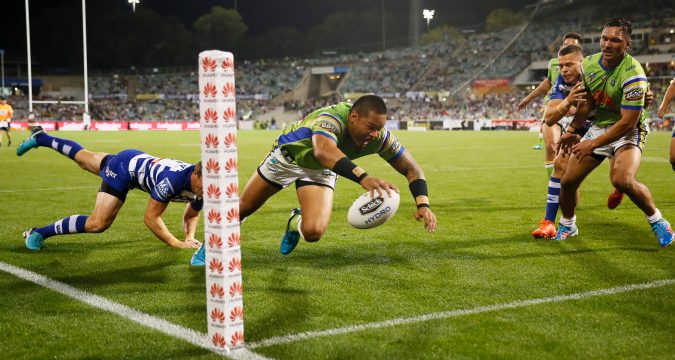 Canberra Raiders secured their third victory of the season on Saturday at 1300SMILES Stadium, overcoming the North Queensland Cowboys 18-8 after a determined defensive display that keeps the Cowboys near the bottom of the NRL ladder with just two wins from eight games.

The Cowboys did score the first points of the evening, however, after 16 minutes, when Johnathan Thurston put Gavin Cooper over from short range.

The Raiders replied when hooker Siliva Havili fed Josh Papalii, who barged over under the posts for Jarrod Croker’s conversion to level the scores.

Raiders winger Nick Cotric was then denied by the video referee for putting a foot into touch when grounding the ball.

Thurston kicked a penalty goal early in the second half, but the Raiders went ahead for the first time when Aidan Sezer scored a superb solo try on 50 minutes.

And a charge to the line by Havili for a converted try on 73 minutes completed the scoring for a convincing victory for the side from the Australian capital.