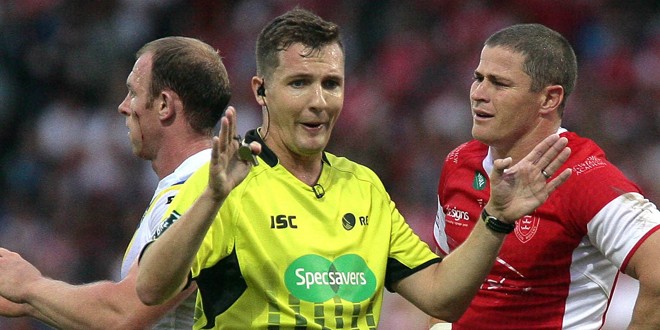 Ben Thaler has been appointed as National Match Officials Manager, a role which will see him implement strategies to recruit and develop the next generation of referees and touch judges.

Thaler, 33,  will combine his new responsibilities with his role as a Super League referee and video referee and is looking forward to passing on his experience to aspiring match officials.

“It’s a fantastic opportunity which I’m really looking forward to getting stuck into,” said Thaler. “Much of the focus will be on identifying and developing match officials in the community game because that’s where we all start.

“I have great memories of officiating at community level and am grateful for all the support I received: my job will be to help guide and support our officials at every stage of their journey on the pathways we are putting place.”

Thaler’s appointment is a key part of the 2015-2021 Match Official Strategy which aims to improve both the quality and quantity of match officials involved in the sport.

“For the last three years I have been helping develop the volunteer structure for match officials locally and regionally,” added Thaler.

“The opportunity to grow the number of match officials and support them through the pathway is something which I am really passionate about.

Thaler took an interest in officiating when he was 13 years old and has no doubts that many young players would gain huge enjoyment from becoming a referee or touch-judge.

“From my own experience, officiating is the next best thing after playing the game to stay involved in the sport. The opportunities for officials have now expanded and have allowed me to be involved at all levels across Rugby League.” he said.

“People don’t often think about becoming a match official but it’s a great opportunity to experience a different side of the game, particularly those who are already active and playing the sport.”

RFL Chief Operating Officer Ralph Rimmer said: “We fully recognise that if we are to grow playing participation, then we must simultaneously address the infrastructures that surround it. Match officials run through the DNA of the sport and we should never underestimate their contribution to Rugby League.”

“Ben has already spent many years working voluntarily to develop young referees and it is this experience coupled with his energy and profile, that made him the ideal candidate for the role. His appointment is another important and exciting milestone in our newly developed match official strategy which is designed to drive recruitment and retention within their ranks.”