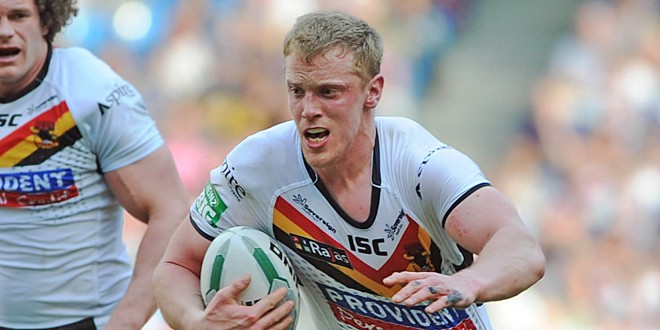 Tom Olbison has become the latest former Bradford Bulls player to agree a contract with a new side for 2017 following the club’s liquidation on Tuesday after signing for Super League side Widnes Vikings.

The Vikings informed members on Wednesday night that they had secured the services of the 25-year-old Bulls forward, who has spent his entire career at Bradford.

“It’s a positive signing for us, and it will add to our squad strength,” said Vikings coach Denis Betts.

“We are bringing in a lad who is really desperate to get back into Super League. He’s at a really good age, really durable and will certainly enhance our squad. He will be pushing for a starting spot in the back row, putting pressure on that position , an area of our squad which I thought we needed to strengthen.

“I’ve spoken to Tom a couple of times over the last nine months prior to the trouble that has been going at Bradford at this time and always felt he was a player that showed a lot of ambition and desire to join the Vikings when we have spoken to him. I think its going to be a place that he can prosper and enhance his career and we are looking forward to working with Tom and him being part of our squad.”

Olbison has already expressed his delight at joining the Vikings ahead of the 2017 season, saying: “I’m buzzing and I can’t wait to get started with the club.

“I’ve had a couple of years in the Championship and I’ve wanted to get back into Super League as soon as I could, so to be given this opportunity with Widnes Vikings is massive for me. I know a couple of faces here from my time at Bradford so I can’t wait to get in and meet all the lads and get stuck in.

“I have seen from the outside all the hard work that the club has been putting in and that was shown at the start of last year in how impressive the performances were. I’m over the moon to be joining the Vikings and try and help the team in whatever way I can.

“Obviously, it’s well known about the things we’ve had to deal with at Bradford over the last few years, so within a couple of phone calls with Denis, my mind was put at rest in terms of what the club is about and where it wants to go and I know I can come here and just concentrate on my rugby league.

“I know that I’m coming from the league below and it is up to myself that I impress the staff, players, and also the fans as to why Widnes have brought me in. I believe myself to be an honest, hard-working forward, and I like to think that I have decent footwork on me as well, and hopefully I can prove my worth to the team very quickly.”