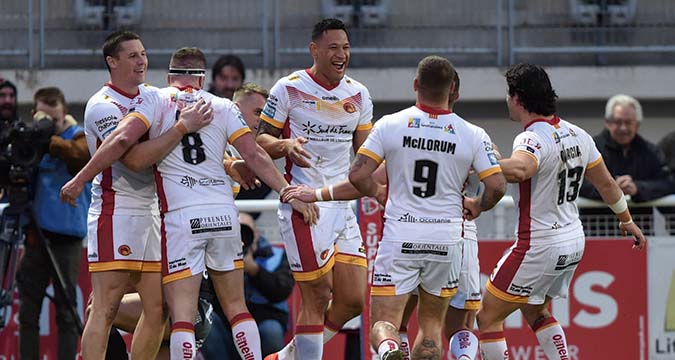 St Helens coach Kristian Woolf will have been one observer who thoroughly enjoyed Israel Folau’s performance for the Catalans Dragons against Castleford Tigers on Saturday.

Folau scored one try and assisted for three others, showing a significant improvement compared to his performance six days earlier against Woolf’s St Helens.

And the key thing for Woolf, when wearing his other hat as the Tongan national coach, is that Folau has recently extended his contract with the Dragons into 2021, meaning he could be available to play for Tonga in next year’s World Cup, giving the exciting prospect of a centre partnership with Leeds Rhinos’ Konrad Hurrell.

Under Woolf, the Tongans defeated England 14-6 and Australia 16-12 in 2019 and with the addition of Folau to his squad, the Tongans, who will play in a World Cup group against Papua New Guinea, Wales and the Cook Islands, would be strongly fancied to reach the World Cup Final.

And Woolf says that Folau is passionate about his Tongan heritage.

“Israel is a real professional and in any meetings or dealings I have had with him he has been really good,” Woolf said earlier this year.

“If he is playing footy that warrants picking him in the side, he will be considered along with everyone else.