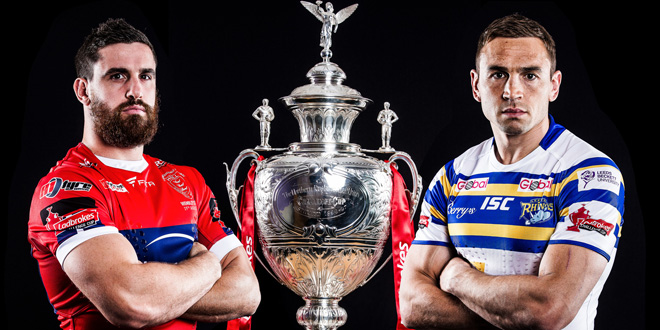 League Express editor MARTYN SADLER makes some suggestions to the BBC for more Challenge Cup highlights to be shown in the coming weeks.

How good it was to see the highlights from the five Challenge Cup Finals that were shown on the BBC last Saturday afternoon.

There was probably about ten minutes of action from each match, but how great it all looked!

How marvellous it was to see such big crowds at Wembley, particularly in the earlier finals.

It began with the 1978 final, with Leeds edging out St Helens 14-12, with the help of three drop-goals (two from David Ward and one from John Holmes), after they had gone ten points down.

It was particularly interesting to look back to a time when the defensive lines were set at five metres, rather than ten metres, which it became in 1993.

We saw no wrestling in the tackle and I would have to say that defences looked very modest at times, while there was very little sign that referees would blow the whistle for technical obstructions.

Nonetheless it was wonderful to catch a glimpse of some wonderful players like John Holmes, who is possibly the most all-round talented player I have ever seen, although I recognise what a big claim that is.

It’s such a tragedy that John, and his team-mate John Atkinson are no longer with us, while from the St Helens team we have lost Geoff Pimblett, Derek Noonan and Dave Chisnall.

And from the 1985 Challenge Cup Final we have also lost Steve Evans, who died at far too young an age.

And wasn’t it great to see that 1996 final, with Robbie Paul becoming the first player to score three tries in a Challenge Cup Final, but still finishing up on the losing side.

However, Robbie’s third try in that game was pure brilliance, and in my view it must go down as one of the top five tries scored at Wembley, at least in terms of its individual brilliance.

Meanwhile the quarter-finals were due to be played on the second weekend of May, and I hope the BBC will repeat the exercise and show some more Challenge Cup Final highlights, perhaps this time going back to the 1960s.

That would surely make a great show.

This article is an extract from Martyn Sadler’s ‘Talking Rugby League’ column in this week’s League Express. Check out League Express for his latest column this Monday. You can take out a subscription, either for the printed version or the digital issue, here.