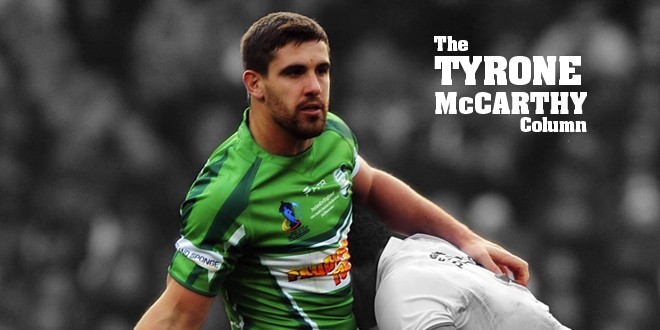 Hull KR and Ireland forward Tyrone McCarthy tackles the issue of dual registration and the impact that the lack of a reserve-grade for Super League is having on player depth and development.

It’s been a while since my last piece, and with the busy Easter period now over and done with, it gives us time to reflect on what has happened over the past month or so.

Personally, I had my first experience of the Hull derby and it was fantastic to get a win over the old rivals and to see how much it means to the city and our fans. We also managed to pick up another win over the Easter weekend for the first time in the club’s Super League history, however we have had two defeats in the following Super League rounds.

A victory in the Challenge Cup over Bradford in between has eased those losses, although we know if we want to be competitive in the competition we need to make sure we get back to winning ways against Wigan this weekend. Usually after this period of the year you can start to see where teams are likely to end up, nonetheless only four points separates fourth from eleventh so there is a long way to go yet. I think the intensity and competiveness of Super League has certainly stepped up, which the table would suggest. I mentioned in my previous article after the World Club Challenge games about player depth in the UK being a big issue, and I think we are starting to see the signs of this after such a rigorous period for the players.

Salford have asked for this weekend’s game to be postponed due to the amount of injuries they have picked up which I couldn’t imagine happening in most other sports. However I don’t blame Salford, as I feel it would be unfair and more importantly unsafe to ask a team of Under-19s to step in, which our current development system requires teams to do. I doubt there will be much sympathy from the other teams in the competition for their plight.

We at Hull KR have struggled with injuries and had players retiring, leaving us slightly short in areas going in to games, and most teams in Super League have probably had similar difficulties already through out the season. However, it is worrying when teams are looking to bring players out of retirement rather than look to promote from within or around the game for replacements. It shows we have a serious issue in our development processes.

For every position there should be two to three players ready and waiting to step in and be able to do a job. The current system doesn’t allow unselected players to play regularly unless they are Under-19s, and with the added pressure of promotion and relegation coaches and clubs are more dubious about selecting a youngster stepping up from that competition.

Over the last few seasons we have seen dual-registration with Super League and Championship clubs, which I have been part of, and found beneficial to get to play in a tough environment when not selected. On the whole though it hasn’t worked due to the traditionalism of clubs and them fearing they are losing their own identity.

This now means players simply not playing for a few weeks if they are not picked for the first-team. Imagine being a full time Rugby player that doesn’t play, it seems to defeat the purpose a little bit. As a player this is hugely frustrating and demoralizing.

From what I have been told it was the clubs, the majority of them, that decided against running a reserves competition and only having a U19s competition due to financial reasons to save money. It is rare for a player aged 19 to be ready to play Super League week in and week out due to the physical and mental demands of the game, although there are a few exceptions. This is where we are losing a lot of players in the game. In order to become a full-time player you need to be exceptional at 19, if you’re not clubs won’t be willing to take a ‘risk’ on you and also they will have nowhere to play you if you’re not first-team. Additionally, it is even harder to get a opportunity in the Championship than before as they also don’t want to take the ‘risk’ on an untested player as they push for promotion or fight against relegation. So what is the 19-year old supposed to do?

A lot of Academy players released from clubs are too proud to go back to the amateur game. One reason may be that they think they are above that standard, but the other worrying idea is that they stopped enjoying the game, and we see them lost to the game forever.

Development is where clubs should be spending the most and a reintroduction of a reserve competition would help maintain participation of our good, young players and give them an environment to thrive, whilst also be a test for them by playing against established full-time players either not selected in the first-team or coming back from injury.

If every team in the competition were to have the same amount of injuries as Salford we would be in essence watching an U19s competition. In order for the game to maintain its intensity the development system needs fixing. The clubs are probably wasting more money now working with kids all the way until they are 19 to say they’re not good enough ‘yet’.

We might as well have no academy system and leave them in the amateur game, then let clubs go around picking the best amateur players when they have matured for a chance.

Either way, the system needs to change quickly otherwise the money that was saved will have be spent on quick fixes like bringing players out of retirement or buying new players from abroad, which we have been over reliant on in the past.

Please let me know your thoughts on this issue as I think it’s a huge area for the RFL to consider.

Tyrone McCarthy is a former Warrington Wolves forward who spent the 2014 season with the Northern Pride in the Queensland Cup. He returned to the UK in 2015 to play for Hull Kingston Rovers. He is closely involved with Rugby League charity The Full Blood Project.