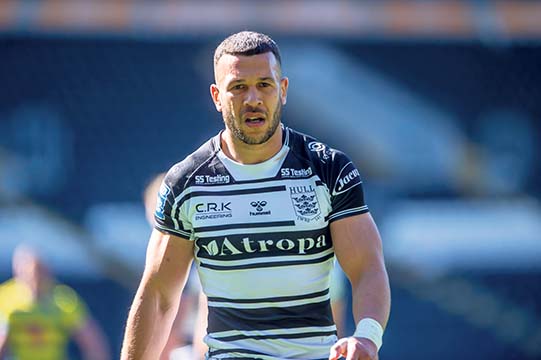 Carlos Tuimavave has revealed twin objectives for June as he plans a big finale to his tenth season in senior Rugby League.

The Hull star is eager to help his club reach the Challenge Cup final, then play for the Combined Nations All Stars against England.

And looking further ahead, the in-form back wants to put himself in line for another appearance against England, this time for Samoa at the World Cup, after helping the Black and Whites make the Super League play-offs.

While Hull, who face St Helens in the semi-finals at Leigh on Saturday, won the Challenge Cup in both 2016 and 2017, with versatile Tuimavave in the Wembley line-up on each occasion, they haven’t made the Grand Final since 2006, when Saints won 26-4.

The 29-year-old, who made his NRL debut for New Zealand Warriors in 2012 and had a season at Newcastle Knights before heading to Hull in 2016, firmly believes there is more than enough quality in Brett Hodgson’s squad to make a serious challenge to feature in both this season’s showpiece matches at club level.

“We’re not playing perfectly by any means, but I think we have shown a big improvement,” he said.

“I think the keyword is effort. We are all turning up for each other and working hard to improve those one percent areas that make all the difference when put together.

“And I think we have made a major improvement in our defence. Brett has brought a good system with him, an all the boys are buying into it.

“Now we have to keep it up and keep working hard to get better still.”

It’s a second successive clash with St Helens after Friday’s 34-16 Super League defeat, and Tuimavave added: “The Challenge Cup is a great competition. I’d love to get to another final, and as a team, we want to be lifting trophies.

“St Helens are a class side who always provide a tough challenge. But as a player, you want to play the best sides and beat the best sides.”

Tuimavave also fancies a tilt at England, who face the Combined Nations at Warrington on Friday, June 25.

“I’ve thought about it, and it would be a great achievement to play for them,” he said.

He has also thought about the World Cup, and continued: “I’ve not played in one yet, so to be involved would be amazing.

“I’m not getting any younger, so if there’s going to be a right time, it’s now, but I know there is a lot of talent coming through the NRL at the moment, so the competition for a place is tough.

“I will just keep trying to play well for Hull, and if it comes, it comes.”