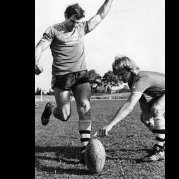 NFL films founded by Ed Sabol in the 60s has played a huge part in the growth of the NFL,it continues to produce high quality film & documentaries for the sport which often attracts viewers that p

It doesn't need the Aussie ref's to do that Frank, I have been watching test match rugby and other internationals involving Gt. Britain/England for over 50 years. This is not the view of a whingi