By John Drake,
March 29 in The General Rugby League Forum

Thought Cornwall did ok ( and I'm not some Luddite hoping that they will fail )  but the lots on here  praising them are also missing the massive 'elephant in the room'.. It was their first game 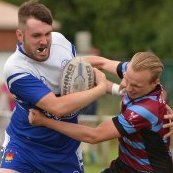 As a neutral, I attended the Keighley-Doncaster game this afternoon. Don't know how it came across on The Sportsman, but it didn't do a great deal for me. I know it's early in the season, but the

Over 400 at Portway today with a pretty big Swinton contingent.  As a ground its not as good as the Butts arena but the match day experience was better with great food and beer. Commercially it w